Critical analysis requires time and a healthy degree of perspective. Our current situation provides us with both, which creates a boon for your friendly neighborhood film critics. Sometimes you can only critically appreciate a new release thanks to the ability you have to reflect on an older narrative.

I came to the new IFC Films release Swallow while in the midst of binge-watching Noah Hawley’s Legion, an FX series based on a character from Marvel Comics, but not just any character, Legion (or David Haller as he is more commonly known) is the son of legendary mutant telepath Charles Xavier, founder of The X-Men. David (played by Dan Stevens) is an Omega-level mutant, a powerful telepath like his father, but so much more because he has the ability to reshape reality as well.

The problem is he’s also mentally-ill, plagued with a shattered psyche that prevents him from processing reality and his powers with any degree of control. In addition, it doesn’t help that David must also contend with having been haunted and/or manipulated by the Shadow King, a mysterious and equally powerful telepath Xavier fought and assumed he defeated when David was a baby. Rather than losing in an epic astral plane battle, the Shadow King took refuge in the mind and body of baby David, seeking an opportunity to turn the tables on his old foe.

As the series creator working from the blueprint laid out by Marvel writers Chris Claremont and Bill Sienkiewicz, Hawley fabricates a surreal dreamscape, a colorful, musical trippy realm with shifting aspect ratios to approximate the sense of disorientation that David experiences. We catch glimpses of David’s early life and the stages leading up to his time in a mental health treatment facility. He’s medicated to quiet the voices in his head (voices which are very real since he can read minds).

Competing forces come for him. One, a quasi-governmental agency intent on collecting powered individuals for their own ends, while the other, a group of mutants seeking to gather a team in order to remain free from control and to live their best lives.

At his core, David longs for love and to be a good person, a hero. When he learns about his abilities, it grants him an explanation of sorts for his predicament, a target for his frustrations, and a chance to learn even more about his past. Taken in by another family as an infant, he knows nothing of Xavier, his mother, or the Shadow King. When he begins his hero quest and learns teasing hints about his family, it triggers a sense of abandonment that threatens to derail his already shaky self-esteem.

Writer-director Carlo Mirabella-Davis posits his protagonist Hunter (Haley Bennett) in a vaguely familiar scenario as Hawley’s David in his new indie release Swallow. Hunter is a newly married young woman, entering a family of great means, but at a disconnect viewers will initially assume comes based upon class issues.

Her husband Ritchie Conrad (Austin Stowell) has just been promoted within the family company and his parents (David Rasche and Elizabeth Marvel) bought the couple a brand new home. Although set in a contemporary period, the home and the family structure seems outdated, harkening back to the 1950s, when a woman’s place was in the home, while the husband worked and caroused with his male co-workers. When Hunter becomes pregnant, the strictures tighten further.

As an escape, the lonely and isolated Hunter starts swallowing objects. At first, she fixates on a glass marble, focusing so intently on it that its almost as if she’s hearing voices, calling her to take the marble into her being. There’s a moment of resistance, but before long she’s swallowed it whole and started to appreciate the instantaneous ecstasy of power and control she’s gained. She knows she can’t tell anyone about what she’s done and when she expels the marble, she cleans and keeps it as a memento.

Hunter’s world, with its distinct period feel and uniform color schemes, mirrors the dreamscapes of Legion, albeit in a far more muted fashion. But color and music create a similar hypnotic state for viewers, lulling and luring us inside the protogonists’ psychoses. In Hunter’s case, when she quickly escalates from the glass marble to a pushpin, again, we hear the psychic call of the object and zero in with her, despite the obvious threat the object poses to her body. The rabbit hole here is both mental and physical and we recognize that this journey will be bloody, indeed.

Legion incorporates time and space into its mental odyssey through David’s fractured psyche. As the series progresses and David learns more about his past, he believes he must fight and kill the Shadow King in order to save not just himself, but the world. His understanding of his powers evolve to the point that he sees himself as a god, and starts to lose connection to morality and ethics. The notion of the ends justifying the means have no meaning to someone with David’s abilities. Crossing time and space to achieve goals make the idea of killing people or altering the thoughts and feelings of those closest to you seem like quaint blips on the larger radar.

Yet, despite such unimaginable feats, David remains human and quite susceptible to human fallibility. He longs for love, the romantic love of a fellow mutant named Syd Barrett (Rachel Keller) or the parents who gave him away when he was a baby for unknown reasons. He wants to save the world, to be a good person, but the presence of the Shadow King throughout his life – the monster in his head – makes him doubt that in any sense of innate or original goodness.

By the third and final season of the show, David morphs into the villain, the figure prophecied to destroy the world, once he’s able to find and kill the Shadow King now returned to his original body (Navid Negahban). His former allies, including the love of his life, are now hunting him in conjunction with the Shadow King, while David enlists the aid of a time traveling mutant named Switch (Lauren Tsai), so that he can go back to meet his father and help him kill the Shadow King during that first battle, before the monster ever seizes control of his infant mind.

Time travel always poses the same tantalizing solution. Go back and remove a threat before it takes form. Kill Baby Hitler. Terminate Sarah Connor before she gives birth to John. Do evil unto the evil before it does evil to you. If only it was all so simple.

The choice alters the course of history, not just in this case, for David, but those close to him. Gaining the chance to know he might have a loving life with his parents means losing the love and companions gathered around him in the present timeline. Such choices illustrate how myopic humans can be, thinking only of themselves (even when they pretend their operating with a greater good in mind). 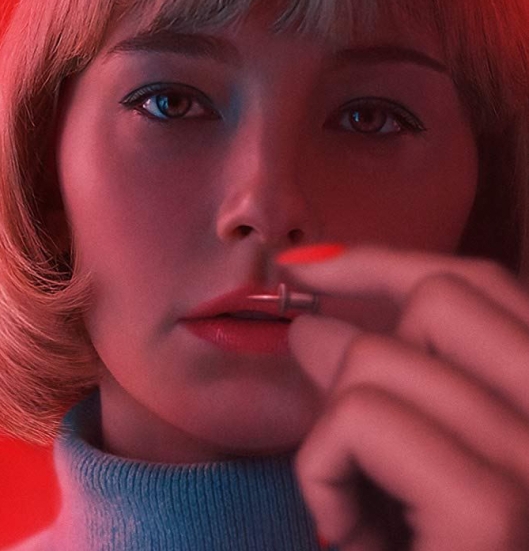 Hunter is diagnosed with pica, a dangerous psychological disorder rooted in an appetite for non-nutritionally-based substances (anything from ice to glass to metals or sharp objects). As part of her treatment (and their desire to exert control over Hunter and the life of their unborn heir), Hunter’s husband and her in-laws have her visit a therapist who in turn begins to suss out a deeply-repressed past trauma driving Hunter’s condition.

The discovery sets Hunter on a course to conduct her own version of time travel, to go back to the source in her past to confront the figure holding the key to whether or not she will be able to have any kind of life of her own.

It was fascinating to watch Hunter’s journey in streaming parallel with David’s on Legion, because at the end of the day, both of them used the same technique to reach the exact same destination. Facing the past. Seeking painful resolution. Checking in to see what condition their conditions were in, maybe not without fear; but instead arm-in-arm with their fears.

The horror of Swallow and the similar surreal comic book thrills of Legion reminds us that what truly scares us is the nightmare that exists in waking life, that we try our level-best to wish or dream away, but can never make disappear, which might mean these two narratives are the best or worst things to face right now.

(Swallow is available on iTunes, Amazon, GooglePlay/YouTube, Vudu, Playstation as well as various cable platforms. Legion streams as part of FX on Hulu.)