‘American Animals’ is a dramatization of the 2004 theft of rare books — by students — from Transylvania College in Lexington. 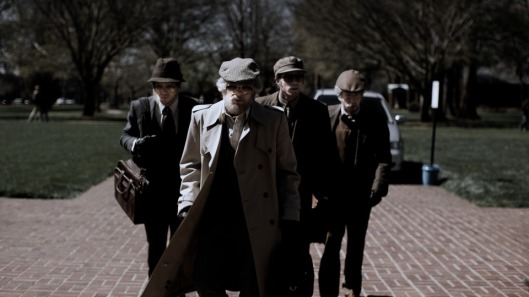 Truth, no matter how much we disagree, has always been about perception. Two people view the same incident, but from their different vantage points (even if the two people happen to be standing side-by-side), can we truly say they are seeing the same event, the same elements taking place at that exact moment? This question is one of many explored in writer-director Bart Layton’s American Animals.

The film is based on an actual crime that happened in nearby Lexington, Ky. In 2004, four college students stole rare books worth millions from the Special Collections department of the Transylvania University Library, assaulting a librarian in the process. They were eventually caught and given prison sentences.

American Animals appreciates the dynamic of reality television, and exploits it to perfection. There is meta-level presentation of dramatizing events, allowing the commentary from the real-life thieves to stand in proximity to that of the actors essaying the same roles. Evan Peters (Quicksilver from the X-Men prequels) and Barry Keoghan (the deliriously creepy kid from Killing of a Sacred Deer) respectively bring to life Warren Lipka and Spencer Reinhard, two of the four college students involved in the crime.

The heist begins almost on a dare, as the pair discuss the lack of security and the preposterous value of the books and artifacts on display. The genius of the narrative emerges as Layton shows the two characters describing the same moments — side-by-side —with blatantly obvious contradictions that might seem minor at first. But later on, we see that the discrepancies reveal a potentially deeper con being perpetrated by these players on one another. Who can you believe when facts have been exposed as fictions throughout?

Film has always reveled in this teasing unreliability. After all, we watched (for some, multiple times) as Verbal Kint (Kevin Spacey) relayed that engrossingly preposterous story about several heists executed by The Usual Suspects of Bryan Singer’s modern neo-noir classic, only to have the wool pulled over our eyes at the very end. The debate continues to rage, in fact, over the identity of the criminal mastermind Keyser Söze — was he the smooth-talking Kint or the ultra-suave Dean Keaton (Gabriel Byrne)?

As the events unfold in American Animals, and as we ping-pong between the two primary points of view, it becomes difficult to determine who is the mastermind behind this dubious and completely misguided heist. Is it enough to present the idea in the first place, or does control evolve through the process of developing a plan? The further along we travel down the story’s somewhat humorous byways, a sly darkness creeps into the frames, leading us to wonder if the rising ruthlessness is what tips one character into control.

At the end of the day, because we’re operating in a criminal sphere, it would seem that success might matter more than anything else, and we come to the realization that these “animals” are clearly stereotypical American fools.

But director Layton guides us to that point with assurance belying his relative inexperience within the feature filmmaking realm. Yet, it’s worth noting that he helmed The Imposter, a 2012 documentary about a young man living abroad in Spain who reaches out to a Texas family, claiming to be their missing teenage son. That film and this one share the same level of supreme confidence necessary to make people believe things other than the presented facts.

None of the actual men involved in the job seems worthy of such lofty appellations as “professional criminal” or “con artist.” They all seem more like a collection of eager tools who might simply have watched too many movies and dreamed of stepping into celebrated roles on the big screen. And now they have — their story earns this distinction for them.

Layton knows just how to make us believe a small-time scam could become the stuff of legend. More than mere truth or fiction, fact or fakery, American Animals is a repackaging of modern cultural mythology.

Storytellers, at the end of the day, are the greatest con artists, because the best of them know which strings to pull to make us believe. That’s the work of the devil.

Now playing at the Esquire Theatre. (R) Grade: A-