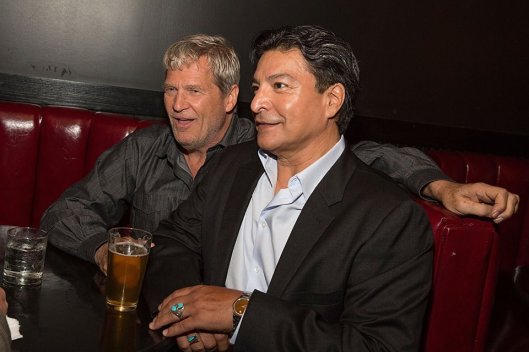 San Antonio, Texas native Gil Birmingham is likely familiar to discerning moviegoers from his appearances as Billy Black, an elder associated with the Native American wolf clan in the Twilight saga or as Red Knee in the underwhelming Lone Ranger reboot from Gore Verbinski, which tried to refocus the legendary Western hero by having his faithful sidekick Tonto (Johnny Depp) recount his origin story. Like any working actor though, he has had his share of appearances over the years as a one-episode player in television serials or lending his voice to animated projects ranging from The Wild Thornberrys to Rango (another Verbinksi/Depp collaboration).

But Birmingham now finds himself in the enviable position of co-starring in Hell or High Water, from director David Mackenzie (Starred Up) and screenwriter Taylor Sheridan (Sicario). The film updates the classic Western outlaw dynamic, focusing on the exploits of a pair of brothers (Chris Pine and Ben Foster) as they race across Texas robbing small banks, largely without placing anyone in immediate danger. They are a tactically smart (for the most part) purpose-driven team, sticking it to a banking system that has filled its coffers with stimulus dollars, while leaving regular folks out in the cold.

Of course, you can’t have robbers without cops on their trail, and in Hell or High Water, we get a pair of Texas Rangers, played by Jeff Bridges and Birmingham, doing their due diligence at each and every robbery, sniffing for clues and signs of motivation. The narrative hinges on the interplay between these two duos, and Birmingham shines opposite Bridges, an Academy Award winner (Best Actor for Crazy Heart) with character and personality to spare, because we believe in the prickly banter that these two men exchange during their pursuit of the brothers.

Alberto Parker, Birmingham’s character, feels ideally suited to the actor. It is the kind of role and opportunity actors spend their lives waiting for; the perfect skin for a supporting player to inhabit and make their own. And that is exactly where I started, during a recent phone chat with Birmingham, who was on the road, in support of the film.

TT: How did you get involved with the project?

Gil Birmingham: It took a general process, you know, my agent finding out about the casting call for characters and I went in and met with the casting director, and then later down the line with director David Mackenzie. They made, which I was very grateful for.

TT: When was the shot and how long did it last?

GB: I think we started in the spring of last year, with pre-production stuff, and while I don’t have the exact months down, I know we went into the summer, because it was hot. And it took maybe a month and a half to two months to film.

TT: I wanted to get the prep out of the way, because I really wanted to focus on the process, especially the dynamic between you and Jeff Bridges. I’m curious, how much of that was scripted and how much of it was improv that developed between the two of you?

GB: Thanks for the recognition of that seeming like improv, but I would have to say almost all of that was in Taylor Sheridan’s writing. We did get the time, prior to shooting, for Jeff and I to hang out, and get to know each other for about a week.

We had an extended connection through music, because Jeff, of course, is a great musician and I’ve been playing guitar since I was ten. A lot of great time spent in musical expression, which helped to bring great tenderness to the acting. Powerfully expressive.

TT: That’s not surprising and it speaks to the larger sense of timing, not just in the link between you two, but the timeliness of the story itself. The narrative speaks to economic issues that continue to resonate. That (Hell of High Water) was a political film without having to beat us over the head with its politics.

GB: That again goes back to Taylor and his writing. It is also a part of the landscape. The desperation, economically speaking, and the choices the characters are forced to make, lead to ethical questions about what’s legal and what’s moral. A lot of people are feeling that. You go from the economic collapse of 2008 and the number of people still caught up in that today. 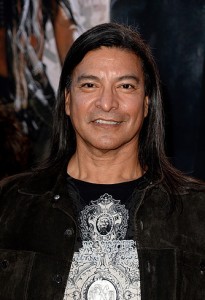 TT: As someone from Texas, was this story closer to you than some of the other characters you’ve played in your career?

GB: I have an interesting background, in terms of law enforcement, because my father was in law enforcement. He served in the military, as a military policeman for 30 years. So I had some of that.

I was born in Texas, but as a military child, we moved around a lot, so I lived in Alaska and Hawaii, Kentucky, San Francisco.

TT: I noticed on IMDB that you have a degree in public policy. How did you transition from that into acting?

GB: (big warm laugh) By the grace of strangers, I tell you. It was a road without a plan. I just let the spirit guide me, and open doors for me. I also studied electrical engineering for four or five years, so there’s an interesting transition there too. But then I got tapped to do a music video, which was my entry into the creative side – television and movies.

TT: What has it been like as a working actor? What have the opportunities been like during your career thus far?

GB: You know, everybody’s journey is distinctly different. Mine has been blessed with paying my dues, doing a lot of hustling without getting a lot of work. I think it’s just the persistence of sticking with it, getting projects and getting prepared for those projects. And choosing good one. I feel very blessed that I’ve been able to do the body of work I’ve done.

TT: For as long as you’ve been in the industry, have you ever considered developing or producing your own projects?

GB: A lot of people talk about telling their stories, the stories they have in them, but I just enjoy the process of acting and all that it involves because it is such a rich opportunity to study human beings and that’s what fascinates me. I also minored in psychology in college, so I’ve always been fascinated by the human condition and what motivates us to do what we do. Acting provides that opportunity for me.

TT: If you were not acting, based on your diverse background, what do you think you would have done?

GB: I’d probably be a rock star! (another big laugh) Following in the footsteps of Johnny Depp!

TT: Circling back to the film. I want to close with a question about what you gained from this role. You talk about studying people, well this film is a study of two relationships. It is, in effect, two separate stories.]

GB: Exactly. It’s the dynamics of relationships between partners from the point of view of their circumstances at the time. I think that’s what spoke to my as I developed a relationship with Jeff and his character. He’s going through a phase of life where he lost his wife and was being pushed into retirement. What does he do with his life now, after identifying himself so long with this other reality? My character has a strong sense of family and duty to that, but also an understanding of the difficulties Jeff’s character is going through. He sometimes expresses it in very politically incorrect ways, towards my character, and what I liked to bring to it, was Alberto’s humanity, a sense of connection to the cores of his culture, that speaks to having respect for all living things.