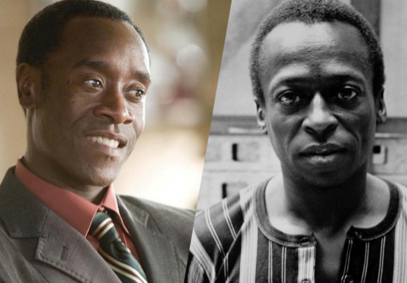 During the last year of Miles Davis’ life, I passed up an opportunity to see him perform live. He was scheduled to play the Philadelphia Jazz Festival, and reviews of recent appearances reported that due to his failing health, his chops were diminished and he was largely playing with his back to the audience, with what was labeled a disdainful air. I passed on the master in favor of what turned out to be a thoroughly engaging set from Bobby McFerrin and Chick Corea, and read the critical drubbing Davis took using handwritten cue cards to announce songs. My younger naïve self was glad I had chosen so wisely.

Well, as soon as the news arrived less than a year later that Davis was gone, I was kicking myself for missing out on a chance to see and experience even a few precious moments of disdain. I longed to spend time in remote proximity to the musician who had given us Sketches of Spain, one of my all-time favorite albums.

Miles Ahead, the new film from multi-hyphenate Don Cheadle, captures Davis a little more than a decade from his final days, but there’s a very real sense of the fragility, both physically and psychologically, that plagued him toward the end. What Cheadle purports to explore is a lost time, when Davis had disappeared from the music scene. We see him wandering around his New York brownstone, listening to the radio, calling the station to berate the DJ who dares to play “classic” Miles Davis music (the real personal injury seems to be having the temerity to attempt to label Davis’ music).

He bickers with people throughout the film over their favorites from his extensive discography. He also has a huge bug up his butt over the term “Jazz.” He prefers calling it “social music.”

This version of Davis is a fictional creation, but we get the sense that what Cheadle has done is fashion him from a mold of the man, filling him instead with a different kind of clay than the original potter. His Davis is a flawed and flawless reproduction. This is an angry and downright human man who has lost contact with the musician he once was and likely will never be again.

His reactions to the narrative constructed around him feel consistent with the icon. We get a degree of proof in this assumption because Cheadle takes us back to an earlier period in Davis’ life (the late 1950s), when he met Francis Taylor (Emayatzy Corinealdi), the vivacious dancer and muse who would become his first wife. Davis, in the instant where he first lays eyes on her, is obviously smitten, and this is before we (and he) come to understand that she is more than merely a stunning beauty. Taylor, as a dancer, displays intensity and drive that soon challenge the dominating hold Davis seeks to have over her life. He wants her all to himself.

The intriguing thing about this younger Davis is that he carries himself like a gangster. Davis is Michael Corleone after taking over Vito’s empire. The world is his and he sees no reason why he shouldn’t embrace the power at his disposal. This, of course, makes him a fickle lover, petty and, thanks to an evolving drug habit, an unstable man. Davis proves to be prone to violence — an encounter with police results in an injury that will plague him throughout his life.

Thanks to the groundwork laid in this brief time we spend in the 1950s, the Davis of the late 1970s — the aimless and drifting figure, the recluse living in his head much moreso than in the real world — is totally susceptible to the wild adventures and dark moods Cheadle sets up for him. The narrative introduces a MacGuffin — a stolen session tape that Davis desperately wants to reclaim at any and all costs from a shadowy player (Michael Stuhlbarg). The idea of this tape, bouncing around during this lost period for Davis, would have been the Holy Grail for his record company or any shady types, and would have triggered murderous intentions in the Miles Davis of legend.

Bravo to Cheadle for breathing life into this fantastic imitation of the Miles Davis of his dreams. His Davis fights, struts and teases us with a raspy croaking delivery. But we owe him a huge debt for daring to ignore the facts and the tired clichés of the biopic genre. Miles Ahead, for all its fiction and meandering, offers a degree of truth about the man at the center of its story that allows us to glimpse where his artistry came from. (Opens Friday) (R) Grade: A-