New releases for May 8: How to Build a Girl / CRSHD / Clementine

It’s time to step into the “way back” machine, to take a trip to the glory days of teen comedies (or, at least, my glory days, the 1980s) and consider a golden oldie from the king of mainstream teen comedies – John Hughes. In particular, I’m interested in the 1985  hit Weird Science, about a couple of high school nerds (Anthony Michael Hall and Ilan Mitchell-Smith) who develop a computer program capable of creating the female companion of their dreams (Kelly LeBrock). As is typically the case, their dream woman wrecks havoc on their lives in ways that transform them into better (and somewhat socially more acceptable) versions of themselves.

Hughes, in most of his movies, was playing some variation of this theme. The idea that teens wanted to alter or transform themselves into more perfect specimens, easy to love and enter different – hitherto unavailable – social spheres. Class was usually a major hurdle for his characters; although if Hughes had been around today, he would have likely felt compelled to explore race and various modes of identity. Or maybe not, since he operated in a homogenized zone of suburban landscape with limited visibility.

With Weird Science though, what matters more is that these two protagonists sought to create perfection outside themselves, rather than attempting to work on the more accessible canvas – themselves. What would the movie had looked like if they sought to alter or augment their minds, bodies, or circumstances?

Teen comedies have continued to follow the Hughes blueprint, but a trio of new releases (Coky Giedroyc’s How to Build a Girl, Emily Cohn’s CRSHD, and Lara Gallagher’s Clementine) seek to subvert the dynamic. Not all of them are interested broad comedic hijinks –  in fact, in the case of Clementine, there’s a stifling dramatic focus that renders the film almost humorless – but what remains constant and consistent among them is a determination for the protagonists to find ways to work on and change themselves in meaningful ways. And, every last one of them is female. 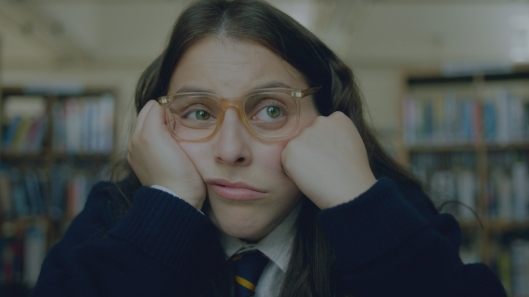 My favorite of the three is Giedroyc’s How to Build a Girl, based on Caitlin Moran’s adaptation of her novel, featuring a Beanie Feldstein in the lead as Johanna Morrigan, an imaginative 16 year old outcast who loves to write, but can’t find a place for herself in the working class environs of Wolverhampton where, even at home, she’s lost in a gaggle of siblings with a father (Paddy Consindine) dreaming of lost musical glory and a depressed mother fading away under the strain of raising her brood. Johanna communes with the cutout photos of her literary and pop cultural icons on the wall by her bed, sharing the trials and tribulations of her daily struggles with the surprisingly animated collection of characters.

Writing about music offers Johanna the briefest real life escape and she embraces the opportunity like a python, squeezing every ounce of joy and pleasure from the experience. She goes to such lengths that she fashions a new persona for herself, the eccentric Dolly Wilde, a mad hat-wearing figure brimming with her outsized wit and manic love of life and language. It’s not long before Dolly Wilde becomes a dominant force not only in Johanna’s cloistered school and community, but the larger music fanzine world.

She starts working more, earning enough to actively support her family – ultimately even better their meager situation – and receives higher profile assignments, leading up to her first feature interview with a forlorn singer-songwriter (Alfie Allen) who inspires the very best from Johanna, which draws the scorn of her more established peers at the zine who let her know that Dolly Wilde works and works best when she’s spewing snarky bile. Before long, Dolly Wilde is more famous than the bands she’s reviewing. She’s sucking the life out of music for the music makers, and feasting on their bones.

Johanna’s journey recalls elements of Cameron Crowe’s Almost Famous stand-in William Miller (Patrick Fugit), except Johanna’s rock and roll adventure stems from a created persona, a real and terrible thing, the literal embodiment of the kinds of pop transformations that gave us Bowie’s Ziggy Stardust or his Thin White Duke. This is life imitating pop art creation and critiquing itself.

And it works because Feldstein, in every single moment owns the furious battle being waged between Johanna and Dolly. It’s like watching a slightly less sexualized teenage version of Fleabag attempting to come to terms with the person she’s becoming. How much hate and self-loathing can you spit at the reflection in the mirror before it starts sticking to you?

Self-creation is all about the mistakes made along the way, and Johanna burns bridges and homes and lives, everything on the path before her. There’s not a lot of grace or contrition in her until the final act and I think that’s the whole point of it. If you’re going to fail during the process of becoming the person you’re meant to be, then do it spectacularly. Watch, Feldstein as Johanna/Dolly Wilde and learn.

I wish Cohn’s CRSHD, which I caught last year at Tribeca had as courageously thrown itself into the abyss. I was excited at the time I settled into the P&I screening because although Cohn considers herself a New York-based filmmaker, she attended Oberlin College, where she studied Creative Writing as an undergraduate, so I looked forward to a health dose of Midwestern flavor.

The main characters of CRSHD – Izzy (Isabelle Barbier), Fiona (Sadie Scott) and Anuka (Deeksha Ketkar) – rally together on their final night of freshman year to get into an exclusive party, so that Izzy can finally lose her virginity. This mad dash, filled with mis-direction, revelations, and of course, lewd hijinks, is as stereotypically universal as one would expect. Location. Gender. Identity. It’s all the same.

And indeed, as I wrote: Midwestern sensibilities flow through the DNA of CRSHD, despite the fact that it plays like a mashup of Superbad and Blockers for the college freshman set. It aims to remind us, once again, that girls will be girls (just like boys), yet CRSHD is far more relaxed and fluid about sexuality and inter-racial hookups, like the generation it represents, but it is reserved in its presentation of couplings. There’s less of the outrageous raunchiness for its own sake that can dominate these teens partying and trying too hard to lose their virginity flicks.

I wanted to like it a bit more than I did. It speaks in the language of social media – animated by emojis, Instagram posts, and swiping dating apps – but in keeping with its Midwestern setting, there are times when the movie feels behind the times (although one of the young BFF’s on the prowl makes a hilarious reference to David+David’s “Welcome to the Boomtown” that triggered a swell of nostalgia in me that I still haven’t gotten over). CRSHD isn’t part of either the time or place I relate to as home.

I have to say, there’s a similarly delicious musical moment in How to Build a Girl where a lovely melancholy scene for Johanna unfolds as Jeff Buckley’s “Lover, You Should Have Come Over” wafts along. The sincerity of the moment is perfectly encapsulated in the on-the-nose lyrics and those haunting chords. For a film about music, this moment sealed the deal for me, entering Johanna’s story into my life. 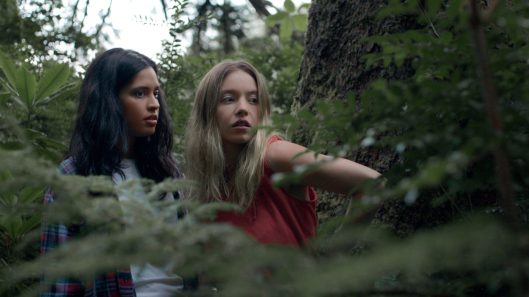 Clementine dares, much moreso than CRSHD, to wallow in outrage at the situations its characters find themselves in.

Karen (Otmara Marrero) finds herself spiraling downward after having her heart broken by her lover D (Sonya Walger). In an effort to get over, past, or through the situation, Karen retreats to her ex’s lake house. Once there she encounters another lost soul, Lana (Sydney Sweeney) who is far more reckless and daring. These young women are wounded and seeking to health themselves, but they use sharp instruments with little skill, meaning they open up more wounds and disfigure themselves in messy ways and struggle to staunch the bleeding.

Yet, somehow it feels like they have infinite capacity to, if not exactly heal, then at the very least they are unable to exhaust the supply of blood available to them. They are dangerous, but in any given moment it is never clear whether the potential for harm exists merely for them or those who happen to stumble into their orbit. The world of the film is closed, in any other case, it might seem claustrophobic, but here it is for the best, it limits the damage.

What Karen, in particular, learns is how much she’s like her ex. In relation to Lana, she’s older and somewhat wiser, seeking to shape the younger woman emotionally as D molded her. The question, which lingers, as the film ends, is whether or not Karen wants to be like D.

The protagonists in these films all craft personas or attempt to fit into unfamiliar (and unwelcome) skins. CRSHD is the most standard, gender-flipping a typical genre exercise but failing to set itself apart from more like-minded mainstream efforts (Booksmart or Blockers). How to Build a Girl ends with Johanna appreciating how she’s at the very beginning of a long journey where she will grow and try on likely many more mad hats and make a lifetime’s worth of bad decisions that won’t have to define her as a bad person. The notion of judgment – bad vs good persona – will follow Clementine’s Karen as well, but she (and we) recognize that true happiness resides far beyond the bad or the good.

When it comes to build yourself up, the lesson, it seems is to never be afraid to tear it all down and start over.