This is supposed to be a review of the new release The Lost Husband from writer-director Vicky Wright, based on a novel by New York Times bestselling author Katherine Center, but can I start off by admitting that I sometimes have a hard time differentiating Josh Duhamel and Timothy Olyphant? Their roles are personas are quite different, but there’s something about the look and feel of them that has a comforting familiarity. Olyphant is cunning (Justified, Deadwood) and ruthless (Die Hard). Duhamel is softer, which shouldn’t be taken as a bad thing. He’s certainly more romantic. 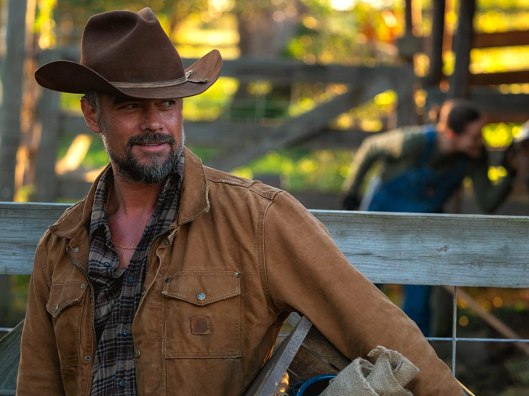 Josh Duhamel in ‘The Lost Husband’

Duhamel has been that rom-com/rom-dram central figure in movies like Win a Date With Tad Hamilton! and Safe Haven (where he always seems a bit too on-the-nose), but he’s also branched out into more action-oriented fare like the early Transformers movies and even settled rather comfortably into hot-Dad roles (Love, Simon). There’s never a moment when you can’t see the twinkle in his eye, which mirrors the same endearing sparkle in his heart. If you want a rogue, go find Olyphant!

In much the same way, I struggle with Leslie Bibb who is reminiscent of Bridgette Wilson-Sampras (probably last remembered for losing pre-Oscar Matthew McConaughey to Jennifer Lopez in The Wedding Planner). Bibb popped for a moment or two in Tag, but generally she’s cast as quintessentially uncomfortable in the situations, mostly operating just off-center, as part of an ensemble, although settled into the B or C narrative thread.

But as a lead – as in The Lost Husband, where she plays a woman who uproots her children from the city to a farm after the death of her husband in a tragic accident – she’s given to surrendering to her frustration and unpreparedness. It’s not just a fish-out-of-water scenario with an urban dweller trying to adjust to rural life, Bibb draws us into a character who is ill-prepared to be the central figure in her own story. Wilson-Sampras would have bumble-stumbled along, but Bibb knows she needs to do something more and goes full-on belly flop. It’s painful to watch, although I applaud her commitment. I mean, who sings so far offbeat to the Bill Withers classic Lovely Day that she worms her way back into the rhythm of the chorus in such an endearing fashion?

Leslie Bibb in ‘The Lost Husband’

Yet, everything in The Lost Husband is forced into a programmatic box straight out of a Hallmark television movie. Duhamel is rough around the edges, as the not-so quiet farm manager who snarkily comments to himself about how Bibb’s Libby isn’t ready for the daily grind of country living. Libby is an uptight city girl with two kids and frayed nerves. You know they’re destined to be together, but there’s a tragic past for both of them. We know about her dead hubby, but what has Duhamel’s James O’Connor suffered? Does Duhamel look like he’s lost anything, other than all of the dark hair on his head (but hey, the grey is quite distinguished)?

James and Libby could be any odd couple in any rom-com, thrown together by something like circumstance – a cold night in the cheese freezer – that barely feels a plot point. And then more complications, like when he teaches her daughter (Callie Hope Haverda) how to fight and she gets suspended. The daughter talks to him more than her mother. We wonder if, even before her husband’s death, if Libby was always so fragile?

It slowly becomes clear that The Lost Husband is a bit of a misnomer for the movie, because ultimately the lost character is Libby and the narrative is her journey of discovery.

Nora Dunn, playing Libby’s aunt Jean who owns the farm, transitions nicely from the funny SNL lady to a truly sad elder clown. She’s unforced and plays the drama with a low-key grace, thoroughly enjoying her straight-role opposite a hammy turn from Isiah Whitlock Jr. as her boyfriend Russ. Dunn maintains a watchful and yet engaged presence in every moment.

I respect how Duhamel and Bibb soldier on through the proceedings and the attentive character support provided by Dunn and Whitlock, but The Lost Husband isn’t worth their efforts. Audiences will find their way to the end of this story long before the movie does, although it may help to make sure we don’t confuse Duhamel and Bibb again with Olyphant and Wilson-Sampras. (The Lost Husband is streaming wide on most digital channels.)

1 thought on “‘The Lost Husband’ – Lost But Easily Found”