As both a film critic and the film programmer for the Over-the-Rhine International Film Festival in Cincinnati, the last couple of years have been eye-opening. We live in a time when buzzwords like “representation,” “diversity,” and “inclusion” are used interchangeably and with a degree of abandon that’s startling, when you consider the near-ubiquitous application of those words in the daily lexicon.

Twenty-five years ago, I worked in the social service realm, for agencies in Philadelphia, supporting people with disabilities. Towards the end of the 1990s, I shifted into a role as a facilitator for a non-profit that trained staff working directly with people to create independent living and employment situations. Of course, even then, I was a film person at heart, so I found ways to incorporate film into staff trainings.

I remember being thoroughly appalled by Forrest Gump, the much-beloved Academy Award-winning film (Best Picture, Director, Actor, and Adapted Screenplay) from Robert Zemeckis based on Winston Groom’s novel. It’s saccharine-rendition of a man with an IQ of 75 becoming a zeitgeist-figure of magical proportions was an uncomfortable cousin of the Magical Negro type that dominated (and sadly still persists) the film landscape.

Whenever possible, I cued up VHS highlights of Forrest (Tom Hanks) playing table tennis or running across the country with his faery tale prowess or reeled off scenes of Dustin Hoffman’s Rain Man as he calculated the number of spilled toothpicks or counted cards at the casino with his calculating yet imminently-redeemable younger brother (Tom Cruise) to show incoming and experienced staff people how damaging such inaccurate portrayals of people with disabilities could be.

I would generally catch myself before I completely hopped up on my soapbox to preach about how damaging such representations were for this community than say, black folks, who also had to combat their own stereotypical reflections onscreen, but could potentially do so, because we could take command of the medium and present a wider spectrum of narratives for ourselves. There’s a far greater responsibility on filmmakers to work with people with disabilities to collaborate on stories and offer them the chance to actively participation the presentations.

I believed that then and I still do.

Yet, it is troubling to find oneself caught between two seemingly opposing notions – appreciating the craft of a performance like Billy Bob Thornton’s in Sling Blade, for instance, while finding its tropes concerning mental retardation and violence abhorrent. It is easy to rationalize the problems away with the argument that the film’s narrative is not attempting to speak for or about all people with mental retardation, just this one character. But when so few examples are presented, the available ones, by default, become stand-ins for the entire community. 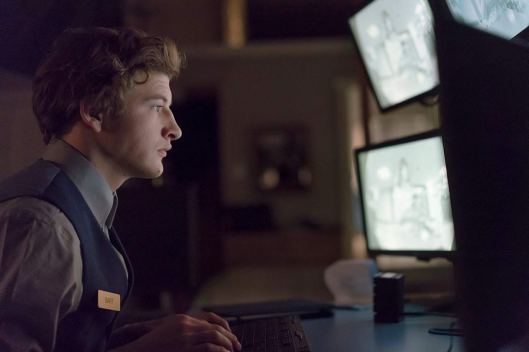 Tye Sheridan in ‘The Night Clerk’

And this is where I find myself with the new release The Night Clerk from writer-director  Michael Cristofer (Primetime Emmy and Writers Guild of America nominee for Gia back in 1999). The story of a young man named Bart Bromley (Tye Sheridan) who works the night shift at a small independently-owned hotel chain. He’s socially awkward and voyeuristic, but harmless. Highly proficient with technology, Bart has rigged up rooms in the hotel with cameras and hard drive chips allowing him to spy on occupants both at work and from his basement set-up at home. He does so to learn how to be more conversational and socially adept.

When a woman (Jacque Gray) books a room late one night, Bart triggers the cameras and begins his latest lesson, only to be relieved by one of his coworkers who catches him tuning in via his tablet at the front desk. Bart heads home, but hurriedly returns to the scene once he spies a strange man enter the room and confront the woman. By the time he arrives, a shot has been fired and his coworker finds him in the room, seated on the bed next to the dead woman.

Plot holes abound. The detective (John Leguizamo) on the case recognizes that Bart’s alibi about needing to come back to retrieve his wallet doesn’t make sense because Bart mentioned stopping by a convenience store to purchase ice cream on his way home. Bart’s mother (Helen Hunt) protects the boundaries she and Bart have established for his independence, but she never truly step-up when the question of his potential freedom could be at stake. One of the chips from Bart’s illegal surveillance is found, but the police never press immediately to see if others exist until much later in the proceedings.

Along the way, Bart is transferred to another hotel and encounters another woman, Andrea (Ana de Armas) who enters into a teasing relationship with him, telling him about her brother who also had Asperger’s syndrome, and was unable to function as well as Bart, which left him institutionalized until his death. It doesn’t take much recognize that Andrea – a near-perfect femme fatale for this day and age – will somehow be involved in the next suspicious plot point.

Once again, Bart will have to make the choice to intervene when someone is threatened, although this time he has more of a personal investment due to his budding feelings for Andrea. There’s never a moment during the unfolding of this story when the audience doesn’t know exactly what’s going on. As smart as Bart is, it’s a bit of an insult to attempt to convince us that he doesn’t know either.

Stripped of any dramatic tension, the real problem though is one of representation. Why couldn’t an actor with Asperger’s have been found for the role? Watching this film took me back to the film Adam from 2009 which featured Hugh Dancy as a man with Asperger’s who attempts to navigate a relationship with his neighbor (Rose Byrne). In these cases, we marvel at the craft and dedication of the performers to get inside the behavioral mindset of the characters, to study and approximate what the characters are going through in these filmed moments. More often than not, we’re quick to reward actors for their efforts.

But is this what we mean when we talk about representation?

Might the story of The Night Clerk have gained some needed intrigue with a more authentic portrayal? It is a fascinating question because as a critic I have posited several times – most recently with Rene Zellweger’s performance as Judy Garland in Judy – how an actor elevated the material. Am I saying that something was lacking in Sheridan’s take on this character? Not at all. I applaud him for not making it all about the spectacle of playing the disability. He wasn’t going for the gold, as it were. But what would it have looked like…

Asperger’s was a fundamental part of who Bart was. Why not authentically render that part of his character?

And why can’t we talk about this more, and inevitably do something to address the situation, so that we can prove that words like “representation,” “diversity,” and inclusion” really matter?