The end of any film festival always arrives in a rush. There’s the feverish hyping of Jury and Audience award-winners, with enough time for die-hards and locals to make sure they can get one last look at the highlights on the last day.

I found myself in sync with the jury, in terms of the top honors in the US Narrative and International Narrative Jury competitions. Burning Cane, from Phillip Youmans, an NYU film student who was a teenager when he directed the feature, became the youngest filmmaker to have a film in competition at the festival. He also snagged the cinematography award and actor Wendell Pierce, from the film, earned Best Actor in a US Narrative Feature Film. The jury deemed Youmins, ” a voice that is searingly original…a latter-day Faulkner, Welty, Williams.”

The International Narrative prize went to House of Hummingbird, which was written and directed by Bora Kim. Having covered the film in an earlier blog post, I was struck by its portrait of a young girl who feels unexceptional until she is truly seen for the first time by someone else and comes to recognize herself in another person and their experiences. It is a quiet film that speaks commandingly and implores audiences to listen.

I will also admit a strong affinity for the Audience Award winners – Plus One from the Narrative section and Gay Chorus Deep South from the Documentary track – but I was far more taken with the Narrative runner-up, which I caught Saturday morning (my last screening day at the festival). 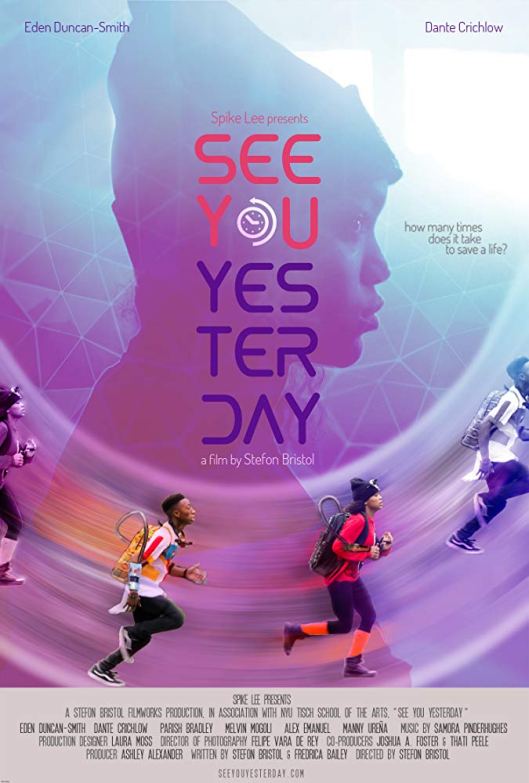 See You Yesterday, started out as a short film from Stefon Bristol (the image above is from his NYU short thesis film), and it bears wide-ranging stylistic stamps – Do The Right Thing and Back To The Future are referenced in meaningful and quite humorous ways – but its real roots speak to a pair of film heroines that are the stuff of legend.

CJ (Eden Duncan-Smith) is a high school science wunderkind, the kind of student who reads Stephen Hawking in her downtime. She’s got an amazingly supportive partner-in-crime (Danté Crichlow) who teams up with her to develop time traveling backpacks, capable of jumping back approximately 24 hours (at first), but only in ten-minute windows.

We know too well the inherent problems that arise when anyone starts mucking around with the time continuum and there’s plenty that goes wrong for CJ and her bestie. But what gives See You Yesterday the juice it needs is its socially relevant spin. CJ is every bit the woman warrior that Ripley (Alien) and Sarah Connor (The Terminator) happen to be, but she’s not intent on merely protecting a cat (standing in for a dead child) or a son (who is also the savior in the war between Man and Machines).

CJ is fighting to reset a movement (Black Lives Matter), one young black man at a time. The stakes are grippingly personal, but at one point when she tells her friend that she loves him, she says, “I love you, Black Man,” and it is obvious that she does. One and all. We’ve been waiting a long time for a black heroine like CJ, brave, impetuous, and smart enough to keep trying to save those that matter most.

Everything is political, as Boots Riley said during his Tribeca Talks segment with Questlove. It’s true. Every artist is expressing an opinion, their opinion on the world around them. Women forced to binge eat before their weddings. How we adjust to the growing reality of humans incorporating technology into their bodies. Black male bodies in classical motion. Bodies in transition. Women used to sell sports.

And so too, the Tribeca Film Festival. Year 18, my first, opened my eyes as both a programmer, critic, and film lover. The festival closes, but the stories keep coming.