After almost 20 years living in the Nati, I remember when it was a treat to hear Ohio mentioned in films. A hearty laugh of appreciation would rumble through a hometown audience if someone onscreen actually spoke the name of the Queen City. We felt famous, connected to the world flashing before our eyes. We were being recognized.

I knew that sense of pride because I had experienced it during my time in Philadelphia during the 1990s. A different city, to be sure, but when the Film Office there started making a concerted effort to bring in studio projects – signaling a return to the Rocky heyday – that also opened the door for a homegrown talent like M. Night Shyamalan to announce his presence. And boy, did things blow up then. That tends to happen when you’ve got “the next Spielberg” setting up shop in town. Man, we even had that little movie Philadelphia shooting in Center City with Tom Hanks and Denzel Washington. You know you’ve made it when your name is on the marque, right Philly?

Now, it seems, Cincinnati’s being seen on a much more regular basis. Thanks to the efforts of the team at Film Cincinnati, the city has landed major productions – Miles Ahead, Carol, The Killing of a Sacred Deer, The Old Man and the Gun – and films riding the waves on the festival circuit (My Days of Mercy).

Another of those titles, writer-director Guy Nattiv’s Skin, about a young man (Jamie Bell) raised and indoctrinated by Neo-Nazi skinheads into becoming a fierce leader in an Ohio community, played TIFF last fall. I missed catching it in Toronto, but leapt at the chance to add it to my first full screening day at Tribeca. It’s bracing subject matter – how Bell’s Byron Widner slowly begins to question his allegiance to the white nationalist cause after meeting a single mother (Danielle Macdonald) and his continued encounters with a black activist (Mike Colter) – never quite achieves the gut-level shocks of American History X, but the film does speak to the disquiet brewing and waiting for someone to turn it into a the type of sloganeering that could mobilize voters. 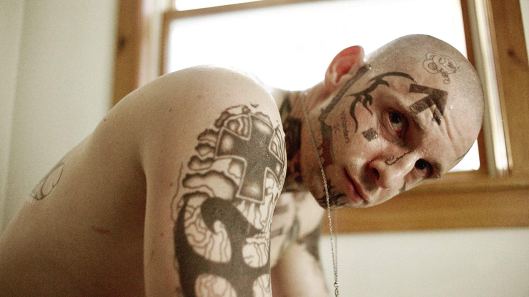 Skin never tips its hand, by drawing direct attention to our current political situation. The focus remains regionalized, which for more discriminating viewers, makes it scarier. This is a story about the Midwest and its citizens who feel discarded, in need of a family, a community, a movement that lifts them up and instills a sense of pride. That it is also based on a true story (the end credits highlight the relationship between Widner and Colter’s character Daryle Jenkins) creates a stranger than fiction vibe that’s never quite as fully explored in the film as it could have been.

But talk about being seen.

And as the regional trend rolls on, there are even opportunities to start tracking the careers of filmmakers with extended roots in Ohio. CRSHD, the new film from Emily Cohn, was my second film of the first day (!) with Midwestern flavor. The Tribeca Festival Guide, in its blurb about Cohn calls her “a New York-based filmmaker,” which she is, but Cohn attended Oberlin College as an undergrad, where she studied Creative Writing.

Midwestern sensibilities flow through the DNA of CRSHD, despite the fact that it plays like a mashup of Superbad and Blockers for the college freshman set. It aims to remind us, once again, that girls will be girls (just like boys), yet CRSHD is far more relaxed and fluid about sexuality and inter-racial hookups, like the generation it represents, but it is reserved in its presentation of couplings. There’s less of the outrageous raunchiness for its own sake that can dominate these teens partying and trying too hard to lose their virginity flicks. The movie feels small, like it really is taking place in a slightly exaggerated version of a liberal arts college in a flyover zone, hours away from an urban center.

I wanted to like it a bit more than I did. It speaks in the language of social media – animated by emojis, Instagram posts, and swiping dating apps – but in keeping with its Midwestern setting, there are times when the movie feels behind the times (although one of the young BFF’s on the prowl makes a hilarious reference to David+David’s “Welcome to the Boomtown” that triggered a swell of nostalgia in me that I still haven’t gotten over). CRSHD isn’t part of either the time or place I relate to as home.