I remember the sense of teasing curiosity I felt walking into the screening of The Intouchables. By the time it reached our market, the film had played and been reviewed elsewhere, so the buzz felt like a snatch of a familiar melody.

Strange, for a foreign language release, with a (for me) fresh-faced lead in Omar Sy, in a more comedic role that was drawing such serious consideration. Topicality explained part of the attraction. Sy assumed the role of an African immigrant named Driss, struggling to maintain his marginal position in France. His social services payments require signatures proving that he’s actively seeking employment. He’s unskilled, which means he enters every situation at a steep disadvantage, with no hope to secure a job. In the end, it’s all about quick signatures.

Driss winds up among a group of professionals waiting to interview with Philippe (François Cluzet), a modern aristocrat and millionaire and his assistant Magalie (Audrey Fleurot). Philippe, wheelchair-bound following a paragliding accident, needs a live-in aide and a potent shot of adrenaline to his soul (and that of his staff). His daredevil spirit has been immobilized, likely left for dead. 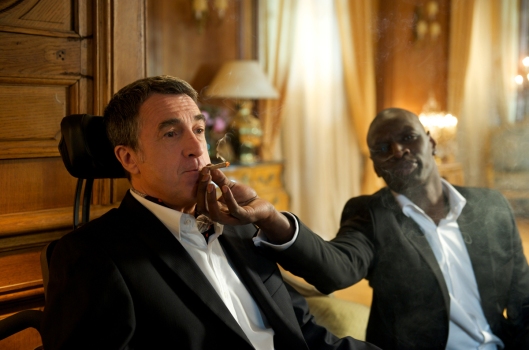 The waiting room is full of serious support, professionals more than capable of handling Philippe’s grooming, his routine and emergency medical condition, and the more mundane administrative concerns alongside Magalie, but what he truly needs is someone who can remind him how to live.

When Driss bum-rushes his way into an interview, leading with his paperwork and his own immediate concerns, that catches Philippe’s attention. He hears and appreciates how Driss feels, stuck behind the eight-ball, watching and completely unable to effectively change his situation. So, he does something. Philippe offers Driss the chance to work for him, to lay a foundation for work experience that might give him a leg up in the next interview. That action, seemingly passive, kicks things off for both Philippe and Driss.

From there, we get all of the typical plot-driven points – the discomfort of Driss learning how to care for Philippe, the personal dynamic between Driss and his brother, the cross-cultural boost Driss gives to Philippe that gets him re-engaged with the finer points of life and living – and it all feels good. It matters too that the story is based on Philippe Pozzo di  Borgo’s memoir. We know, on some level, the happy ending is up ahead and we’re able to enjoy the smooth ride.

Should we need the added translation, beyond the subtitles, into spoken English? Are we unable to recognize and empathize with Driss because he’s a “different” kind of immigrant than what we’re used to in the US? Is Philippe’s status as an aristocrat too much of a diversionary factor?

It would seem that the answer to all of these questions was yes, because right away, discussions popped up, a clamoring for an American remake. Of course, that triggered a new round of questions. How would you juggle the immigrant angle with the potent racial dynamic? Who wouldn’t love seeing the black-white comedic interplay? But our immigration situation calls for a different (less familiar) set of would-be buddies.

At the end of the day, the obvious decision was to keep it simple. But let’s not immediately assume simple is bad or wrong.

As Philip in this Neil Burger remake, Bryan Cranston downplays the inevitable frustration, mainly because there’s always a mischievous light in his eyes and a healthy smirk on his face. He’s got great comic sensibilities and by playing a quadriplegic character, not moving sharpens the attention on his expressive features. Plus, even when Cranston is telling us major parts of the story, he has that classic storyteller’s ability to show us what’s going on, by inserting us into the narrative.

And, in the place of Sy, we get Kevin Hart, an updated version of his typical motormouth stand-up comic schtick. Here, Hart recognizes that he can’t fast talk his way through and all over this story. He needs to act; which means he needs to listen and react within the moment. Movie acting is not about waiting for the laughs (and the energy) from the audience and Hart exhibits a degree of trust in his screen mates, and why wouldn’t he, since he’s got Cranston and Nicole Kidman (as Philip’s assistant).

Throughout this retelling, a knowing sweetness and comfort suffuses every choice in every frame. The humor isn’t stereotypically broad. The class divide isn’t trying to rub our faces in upper-class snootiness. It is all familiar, but grounded in routine.

Without immigration as the “issue” between the two men, The Upside falls back on race and incarceration. Hart’s Dell Scott is a man, fresh out of prison, trying to secure employment in order to pay child support to his girlfriend for their son. Can he break the cycle of absent/negligent black fathers?

On we go, with nearly every beat here mirroring what came before in the French film.

Yet, it was the end credit title that flummoxed me the most. As we reach the inevitable happy ending, the American filmmakers dare to tell us that Philip and Dell remain friends to this day; as if what we’ve just seen was the original adaptation of Philippe Pozzo di Borgo’s story. Upfront, we’re informed that The Upside is “inspired by a true story,” but inspiration only goes so far.

Why do we (American audiences) apparently need to feel like what we just say was so real that it continues to live on, beyond the screen? This version of these two men is a facsimile of a facsimile. The Intouchables plays fast and loose with certain elements of the actual timelines and details of di Borgo’s life (like killing off his wife prior to his disability when, in fact, she was alive and involved to some degree with him during this phase of his life), which the remake repeats as well.

It seems we have indeed entered the post-truth age, which I suppose means history and the narrative arch only matters if it has an American stamp of approval. I would have been happier, in the case of The Upside, if it had just been presented as “a” story, a simple tale with a few simple human truths. (Grade: B-)