By the end of the HBO series The Wire, I couldn’t imagine a more perfect merger of an actor and a role than Dominic West’s portrayal of Detective James ‘Jimmy’ McNulty. West captured all of the charismatic rogue’s devil-may-care tendencies – the impossible and mercurial invulnerability, the innate sense that guaranteed he would be able to piss off everyone doomed to share space with him, the predatory sexual allure – as well as the dogged righteousness and determination that would led the lawman to continue to bang his head against bureaucratic walls and a legion of power players (on both sides of the law and order divide) in an effort to protect and serve. McNulty was the last man fighting the good fight, but he was no angel; West made sure we recognized there was a dark abyss hidden every time the character flashed his smirking grin and winked his dreamy eyes at us. 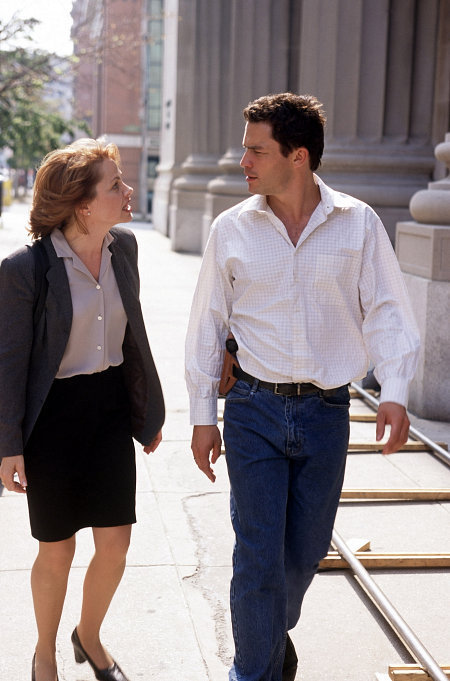 Deirdre Lovejoy and Dominic West in ‘The Wire’

I wondered if West would ever break free of this complex persona, which was so much more than a role disguised as a collection of stereotypes set in a procedural drama.

And then…lightning struck a second time for West. The Showtime series The Affair introduced us to Noah Solloway, a struggling novelist with a family – his wife is played with unending fury by Maura Tierney – who heads off for a typical summer vacation and, by chance, encounters a waitress named Allison Bailey (Ruth Wilson) who happens to be emotionally adrift as well. The pair rush headlong into an extramarital relationship, which the creators (Hagai Levi and Sarah Treem, the duo behind the HBO series In Treatment) astutely frame in curious fashion – offering opposing perspectives of key events that at times appear to document impossibly different takes on the situations. The Affair dares us to consider just how likely it is that there is no such thing as “shared truth.”

One of the astonishing aspects of the series is how it allowed West to re-invent himself; a feat that his co-star Wilson shares, since up to this point, it was hard for audiences familiar with her diabolically wicked turn on the BBC series Luther (which starred another Wire alum Idris Elba) to hit the reset button. West projects all of the world weariness of a minor-level promising talent who faced years of blinking cursors and papers to grade in an effort to make ends meet, but there’s still more than a shard of arrogance and pretension that seeps from his pores like bottled musk.

McNulty and Solloway could be twins separated at birth, as in the genial-minded Three Identical Strangers documentary (which becomes conspiracy-driven in its second half) or The Girl Who Takes An Eye For An Eye, the latest frenzied tale from author David Lagercrantz who has taken over the Stieg Larson thrillers. There’s greater subtlety at work in the details that West uses to create unique characteristics for each role, but without a doubt this cop and writer duo are lost siblings, like the Jeremy Irons fetishistic twin gynecologists in Dead Ringer.

It is not beyond the realm of plausibility to imagine the writer Solloway stumbling upon the exploits of McNulty – during one of the disgraced downturns in his perpetually oscillating career – and reaching out. It would be fascinating to watch them, staring across a diner table at one another, seeking the reasons and means that would allow them to forge an uneasy alliance.

And what we learn from West is that he’s constitutionally unable to make a case for fidelity to another person. His characters, at their bests, are loyal only to their own urges. McNulty lives for righteous justice, by any means necessary. Solloway loves elusive moments of inspiration, anything capable of tickling his creativity. Each man knows what they are pursuing is not something that can sustain itself over time.

What is it with writers onscreen? White male writers, generally speaking, are wretched human beings. In the aforementioned case, Solloway cheats on his wife and uses elements from his life as fodder for his work. Based on the prevailing notion of writers in mass culture, this probably seems like standard operating procedure for men who wield pens for a living.

A few weeks ago The Wife served up yet another prime example of this claim. In an earlier breakdown of the film, I spoke of how Glenn Close dominates its frames, her steely grace and rising seething anger ignites and scorches everything and everyone in her wake. That is all quite true, but it is fascinating to watch as Jonathan Pryce, playing celebrated writer Joe Castleman who receives a long-awaited call from Stockholm about a Nobel Prize for Literature with his name on it. He fumbles his way through the next few days and weeks, performing a role for all those who know him. He’s astonished and honored, humbled yet quite pleased with himself, and through every phase, he’s quick to lavish praise on his wife (Close).

We come to find out that, back in the day, she was a writer as well, at a time when women were supposed to do anything other than put words on a page (well, not exactly anything, because primary they were to be seen, not heard). Joe had ideas, but lacked the ability to translate them into engaging prose. And then, he garnered a wealth of experiences with women and the complexities of life, but still he struggled to craft these spirited interludes into the stuff of literary legend. He penned drafts, and his wife cleaned and tightened the writing into stories readers bought and critics longed to reflect upon.

Somewhere along the way, Joe started telling himself a tall tale about the inspiration and the effort behind his output, one that became easier to believe. He recognized only his contribution, even and especially when his wife took over more and more of the writing. He managed to live the mythic writer’s life and that was all that mattered.

Until it was obvious that he didn’t know enough about the books to keep the stories straight. And it is in these moments, with Pryce under the microscope that The Wife reminds us that there is so much more than a scorned woman on display. These men, sad and scrambling to hold onto their privilege and self-worth, fret over a world that is slipping away from them and a status as the center of the universe that was never earned, never worth anything at all.

It would seem that this is the state of white men in this cultural moment. Scratching and clawing for purchase, for instruments to (write) their declining status.

Which leads us to Colette, which is what happens when you combine Dominic West, literary schemes, and a coquettish young woman (Keira Knightley) in period drag. Does it really matter that Colette is based on a true story, as opposed to The Wife, which is pure fiction? By this point, we’re conditioned to believe in the venality of men, especially those played by West, right? His brand of bad hasn’t crossed all the way over to pure evil. What we’re talking about is more of a self-serving tendency, but I certainly have no doubt that there’s a role out there for West where he will eventually be able to utilize his charms for truly horrific aims.

There are moments though, in Colette, where West, as a self-described literary entrepreneur known informally as “Willy,” appears to be a mere half-step away from the kind of dark side that offers no hope for redemption. Having seduced Sidonie-Gabrielle Colette (Knightley), an educated country girl without much of a dowry to become his wife and move to Paris, Willy pretends to be a more progressive-minded fellow, a cad willing to indulge his new bride’s same-sex proclivities and her flirtations with writing as long as he can claim the lion’s share of the glory. But Willy proves willing to forcibly lock Colette up in her study, steal her lovers, and sell the rights to her work right out from under her. The only redeeming element in his character is that he doesn’t stoop to killing anyone to hang onto what little he has.

And overall, that has been the saving grace for West in all of these roles. He’s certainly played tough and rugged men, fellows easily caught up in their machismo and their self-righteous fury, but he’s never crossed that particular line.

As Colette makes its way though its box office run and potentially makes a play for awards season standing, much of the attention will fall on Knightley, for her highly-deserving turn as this photo-feminist icon, but maybe we should spend a few moments considering what West offers us by way of cultural reflection. He is man, at the precipice, on the verge of becoming the epitome of our worst tendencies.

Begging the question, can he (and by extension, we) be saved?