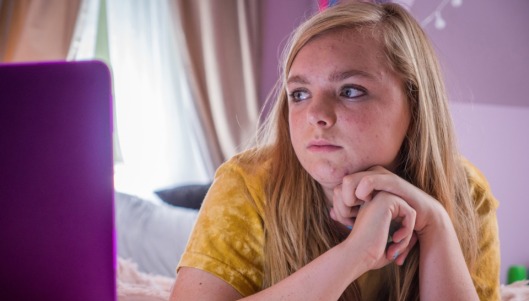 Kayla — the protagonist of comedian Bo Burnham’s new film Eighth Grade — is an awkward middle school student on the cusp of transitioning to high school. She has her own YouTube channel, which captures her life lessons as she makes her way through the last week of her eighth-grade year. From the very first moment we see her, as played by Elsie Fisher, we worry. When she’s addressing her audience (us), warning signs abound. Mainly, she’s trying too hard to get things right, and every single ounce of her effort shows.

The evolution from middle school to high school — specifically the headlong dive into the teenage phase — is more difficult than going from the teen years into early adulthood. There’s no instruction manual, and no kid wants to hear feedback from their parents because there is absolutely nothing cool about any adults, especially the ones you’re forced to live with. And fellow students can be cruel. At best you hope for an older sibling who can offer up a little of their long shadow to shield you from the constant glare of the cliquish constellation of blinding stars.

But Kayla, lacking a brother or sister, seeks the sanctuary of the internet, where she can pretend to be open and wise while searching for connection. But we plainly see that she’s a ball of anxiety that’s a bit hollow in the middle — she lacks any experience to give her words real meaning. It is obvious, while watching her struggle to come up with examples to prove her simplistic points, that she has no foundation to even make a statement of belief on the subject of her maturation.

Then there is her actual existence in the real world (rather than in the virtual realm of social media). Here, Kayla is little more than a ghost, desperately haunting the hallways and classrooms of her school in the hope that someone will feel and acknowledge her presence. She’s voted one of the quietest students in her grade, but you wonder how anyone even noticed her enough to deem her “quiet.”

Burnham (who got his start as a YouTuber) locks Eighth Grade into the heightened anxiety of Kayla’s perspective. But the film steers clear of the bleak chic of Kids (it also lacks the gleefully headstrong exuberance of The Florida Project). However, it does capture the palpable fears of kids like Kayla in the face of the oppressive indifference from her peers and her failing attempts to achieve the recognition she earnestly strives for.

I found myself drawn to Kayla’s father, Mark (Josh Hamilton). The actor succinctly embodies the floundering impotence of parenthood, but somehow continues to project an indomitable spirit of hopefulness. He is, in some ways, exactly like his daughter. He struggles to maintain his good cheer even while dark anxiety encroaches from all sides. We’ve seen this from him previously in the Netflix series 13 Reasons Why, where he plays the father of an emotionally beleaguered protagonist who seeks to avenge the reputation of a friend who committed suicide.

Parents in young-adult narratives like Eighth Grade often share similarities with police and other authorities in Hitchcock films. They are seen as completely ineffective figures, detached from the events taking place and hopelessly unable to have an impact. But what I appreciate in the case of Hamilton’s work in both Eighth Grade and 13 Reasons Why is how he finds ways to make sure that his presence is felt, whether he’s onscreen or not. We wonder where he is and why his onscreen children fail to seek out his advice. He’s not hip or all-knowing, but he gives us the sense that he’s striving to connect and is available.

That’s exactly what most parents hope their kids understand. We long to be there, during both the good and the bad moments, to listen, to hold our kids tight, to share the laughter and the tears along with the occasionally requested words of encouragement.

In Eighth Grade, the heartfelt presence of Kayla’s father means that there is a chance she won’t fall prey to the countless nicks and cuts of life that might lead her to taping her own YouTube version of 13 Reasons Why. (Opens Friday) (R) Grade: A