Gus Van Sant (“Drugstore Cowboy” and “My Own Private Idaho”) has an affinity for shaggy dog protagonists, folks who resonate on the lower frequencies, where those attuned to the mainstream can’t quite get the full signal. And his latest film, “Don’t Worry, He Won’t Get Far on Foot” captures the fraying at the edges life of John Callahan (Joaquin Phoenix), a down on his luck alcoholic who sinks even lower after a near fatal accident leaves him confined to a wheelchair. Reliving the last day of his pre-accident life, while watching him slowly gain enough perspective to start creating starkly controversial cartoons to support and express himself, we see how tragedy transforms into triumph, but Van Sant’s approach is a bit too disjointed to make true emotional sense. Without a solid through-line, the film fails to bridge obstacles along the narrative path, preventing us from getting very far with the character, despite an engaging turn by the ever-reliable Phoenix.

I am a huge fan of the Tony Scott/Denzel Washington thriller “Man on Fire,” which was the perfect combination of Scott’s frenetic, sensory-assaulting style matched with Washington’s seething righteousness. I get the sense that Antoine Fuqua, who has worked with Washington four times now (most notably on “Training Day” where Washington earned the Best Actor Oscar), wants to steer clear of that signature marker. And with this second installment in their updated adaptation of a familiar television series, the duo creates, instead, a quieter clone of Liam Neeson’s “Taken” franchise. Washington’s aging action hero has nothing to lose – his wife is already a cherished memory – but “The Equalizer 2” attempts to give him people to care about and ultimately protect against the bad guys. There’s just so little to focus on, other than the relentless violence that, all things being equal, I wonder if Fuqua wouldn’t have been better off tapping into some of that old school righteous fire.

I can’t stand movie musicals! It feels so good to get that off my chest. That necessary bit of honesty will signal a healthy disdain I carried into the theater for director and co-screenwriter Ol Parker’s take on the “Mamma Mia” sequel, which has the most on-the-nose subtitle ever, because I truly felt the despair of having to go “here” again. The movie purports to tell the parallel stories of Sophie (Amanda Seyfried) as she seeks to transform and re-open the island hotel her carefree mother Donna (Meryl Streep) built and the wild adventures of a young Donna (Lily James) when she first landed on the Greek isle and met the three men who “fathered” Sophie. This is completely a movie for audiences to laugh, cheer, and sing along to, but it fails to offer any meaningful illumination to Sophie about her mother or her mother’s past, which was supposed to be the point. Does listening to ABBA kill brain cells? Obviously, so I refuse to ever go down this road again. 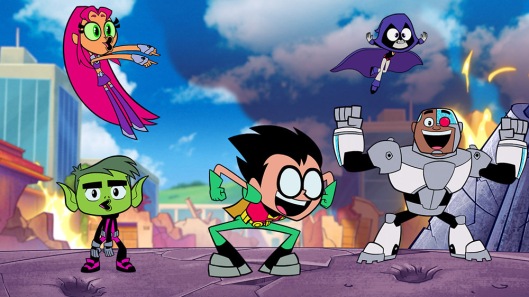 The “Teen Titans Go!” cartoon series operates as DC’s pop cultural quip-hippy version of Marvel’s “Deadpool” minus the extremely raunchy aspect. It succeeds, largely because its self-referential elements and winking attitude walks that fine line between appealing to both adults and children. Plus, the creative team works their magic in short intervals. Much like “SNL” sketches that get stretched to feature length, “Teen Titans Go! To the Movies” loses much of its punching power over time. We get that Robin (Scott Menville) and the teen crew, who look like cuddly pre-teen bobble heads, want to prove themselves to be real superheroes, but why, for instance, is more attention paid to Superman (Nicolas Cage) as a mentor, instead of Batman (Jimmy Kimmel)? That’s a far too serious quibble, but it highlights just one of the things I spent time thinking about during the movie’s run time, rather than focusing on the actual story. I wasn’t bored exactly; I simply let my mind wander, which never happens when you’re watching the series on the small screen.