The arrival of Zack Snyder’s “Justice League,” the magnum opus of the DC comics cinematic universe solidifies the current default of moviemaking, a sense that achieving the lowest benchmark possible can and should be celebrated as a win. Since “Justice League” wasn’t as horrible as the dark and dismal “Batman v Superman: Dawn of Justice” movie means that it should be qualified as a success, right? I don’t think so. The film operates in a vacuum of sorts, a place where people have no hope because Superman (Henry Cavill) has died and Batman (Ben Affleck) runs around gathering a super team to carry on the good fight. But the stakes are low, thanks to a CGI villain (voiced by Ciarán Hinds) straight out of the 1980s and the botched plan to cram in shorthanded backstories for a group of newly drawn heroes that might actually be interesting characters. The problem is that I, and most audiences, will have no desire to spend time with them in this empty “League.” 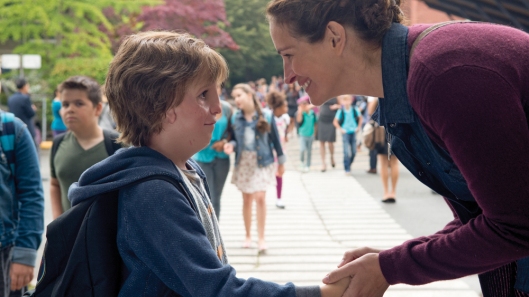 Stephen Chbosky’s adaptation of RJ Palacio’s bestselling novel “Wonder,” based on its saccharine trailer, has all of the hallmarks of cute family friendly fare that’s a half-step above an animated movie with talking animals. I would beg any and every one to ignore the teasers and allow this film the opportunity to change your minds, because it most certainly will. Young August Pullman (Jacob Tremblay) has endured countless surgeries aiming to correct severe, and in some cases, life-threatening facial differences, and it has had an impact not only on the boy, but his parents (Owen Wilson and Julia Roberts) and his older sister (Izabela Vidovic). As August prepares to leave home schooling behind for his first chance to interact with his peers in a mainstream school, “Wonder” exposes real fault lines in the family, along with an expanding number of interconnected perspectives that point to a well-earned bright future for everyone who comes into contact with this special young man.