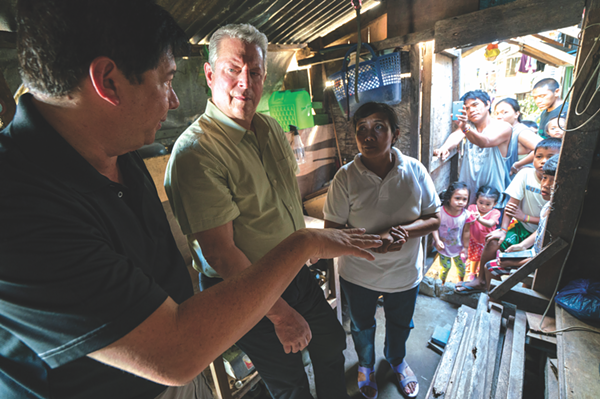 Former Vice President Al Gore has been on a burning crusade to wake this country and the world to An Inconvenient Truth, to use the title of his 2006 Academy Award-winning documentary. We are facing climate change/global warming and it is a serious threat to our existence.

You might have thought that film’s impact would have done the trick.

In that documentary, directed by Davis Guggenheim, we saw Gore deliver a PowerPoint slide presentation intended to raise awareness about global warming and explain the immediate steps that could curb this escalating danger to the environment. It was a lecture sounding an alarm.

But the climate change deniers have proved surprisingly strong. So, 11 years later, we now have An Inconvenient Sequel: Truth to Power, from directors Bonni Cohen and Jon Shenk. In it, Gore continues to constantly update the message with new data: up-to-the-minute tracking of glacial melting, annual temperature fluctuations, rising tides and ocean swells during storms. The waters are reaching farther inland, clawing away more of the shoreline and coast, resulting in shrinking acreage for our cities, states and, ultimately, our nations.

Gore again inspires. This is so much more than mere “talking points” or one side of a debate — the kind you might have over drinks at a party or shout across a crowded bar with music drowning out the facts. This is truth speaking. You can’t help but hear what Gore is saying now. You’re forced to acknowledge that what his An Inconvenient Truth told us more than 10 years ago really is happening. It wasn’t a scare tactic, a mad prophecy of gloom and doom of the kind that once was delivered by a bearded guy with a sandwich board on the street corner.

Yet, his Inconvenient Sequel isn’t some final bell signaling the arrival of the end of times. It isn’t an “I told you so.” Not yet. He delivers some good news: We can still do something. He’s out there trying to spark action. He’s speaking truth to power.

An Inconvenient Sequel is science fact. But to use a science fiction reference to show just how powerful Gore is here, he brings to mind the pyrokinetic character in the Stephen King novel Firestarter. Gore (figuratively) can start a fire with his mind, such is his ability to make global warming a timely issue again for everyone, as it once was. He is that convincing.

It’s fortunate that someone had the sense to bring him back for a sequel. How did that happen? After being approached by Participant Media, which produced An Inconvenient Truth, directors Cohen and Shenk met Gore in Nashville. There, they got an all-day briefing on the climate crisis and the potential solutions to the crisis. From that, they planned their film.

“We basically came up with this idea that it would be an amazing opportunity to follow Al around, kind of a fly-on-the-wall approach, to see him go about the work that he does,” Shenk says.

That decision led to an 18-month commitment. “We were probably both surprised and wide-eyed about Gore’s relentless energy to this subject,” Cohen says. “He is truly someone who gets up every day and thinks to himself, ‘What can I do to push the needle forward on the climate crisis?’

“We, like many Americans, were probably thinking, ‘I wonder what Al Gore’s been up to over the last 10 years?’ What we discovered was that this is what he’s been doing, every day of his life, for all these years.”

An Inconvenient Sequel, it should be noted, isn’t the only film now in theaters out to start a discussion on an issue of contemporary concern. Many see Detroit as a conversation starter about race and community policing. But with An Inconvenient Sequel, it’s apparent Gore is tirelessly trying to build a sustainable movement. He’s pushing beyond the initial steps of dialogue and engagement. The film shows him training people globally to be informed and dedicated activists in their communities.

Toward the end of the film, there’s a statement from Gore that Cohen sees as an acknowledgement that the former vice president doesn’t see climate change/global warming as a political issue. “It is much more an emotional issue,” Cohen says. “And the environmental movement, with Gore as one of its leaders — and there are many — is in line with the other social movements of our time. We are at a point where these very conversations can tip us over the edge into solving this crisis. That’s why we made the film.” (Reprint from the San Antonio Current)