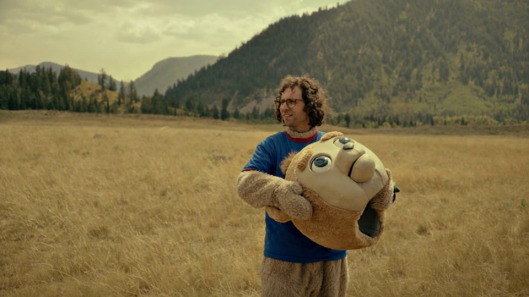 We never fully appreciate the fine and distinct lines between genres and our emotional responses to them until a filmmaker dares to firmly plant feet on both sides of the line of demarcation.

In Brigsby Bear, director Dave McCary, known for shorts and comedic television work, oversees a script from Kevin Costello and star Kyle Mooney that captures an awkward handshake between comedy and drama. The film tells the story of James Pope (Mooney), a young man raised in isolation by Ted (Mark Hamill) and April (Jane Adams), believing that they are survivors of a post-apocalyptic event. His primary connection with the outside world is through a children’s television show called Brigsby Bear Adventures, which it turns out Ted and April have been producing on their own for years.

The couple snatched James from the maternity ward and kept him in a scenario reminiscent of Lenny Abrahamson’s Room, minus the malignant intent of the captor. Ted and April obviously love James and have treated him well, given the circumstances. Once discovered by the police, James returns to a home and family he’s never known. His birth parents Greg (Matt Walsh) and Louise (Michaela Watkins) and his younger sister Aubrey (Ryan Simpkins) attempt to ease him into the new dynamic and a completely unfamiliar world, but James retreats to the one thing that sustained him all along — Brigsby Bear.

He longs for more of those wide-eyed adventures, so he decides to create his own version as a feature film and elicits help from Aubrey, some of her friends and even a kind police officer (Greg Kinnear) on hand when James was found.

The comparison to Room highlights yet another connection, in that Abrahamson also gave audiences an insightful look at another figure seemingly cut from a similar cloth in Frank (2014), which presented Michael Fassbender as the titular character, the lead singer/songwriter of a fringe band who performs (and ultimately lives) inside a giant mascot-styled head. Audiences enter Frank’s world via Jon Burroughs (Domhnall Gleeson), an aspiring musician tapped to join Frank’s group.

There is a “magical mystery tour” vibe to Frank, allowing us to watch the wonderful behind-the-scenes experiences granting us complete and unfiltered access to the inner lives of dynamic stars. Of course, reality sets in and we see that the Frank persona, the big fake head with its blank expression, is just a shield protecting a fragile psyche. Frank is a wounded soul, trapped and forced to hide.

Brigsby Bear offers James something more vital and necessary. The make-believe bear character, this creation of his captors, is an honest-to-goodness protector, a tool directly linked to James’ imprisonment, but also the lifeline that opens doors in the real world. James shares the Brigsby Bear tapes with Aubrey’s friends, in particular Spencer (Jorge Lendeborg Jr.), a would-be film enthusiast who teams up with James to extend the life of Brigsby Bear by creating a DIY feature film.

A clear dilemma emerges for James’ parents, who worry about the potential unhealthy psychological issues he might have because of his continued association with the bear. But everyone else seems less guarded, even in some ways attracted to the innocence of the character. What this says about us is that somewhere deep within we long to remain connected to the safety of our fantasies. Frank, inside that big head, and James, in the embrace of Brigsby Bear, each find peace and security from the pressures and dangers lurking outside.

Mooney’s James — bringing together the traits of both Frank and Jon from the film Frank — shows us how easy it is to walk with one foot on either side of a divide (comic fantasy and psychological drama). James is wide-eyed, but quick to understand and appreciate the new situation he must settle into.

On the surface, Brigsby Bear will seem somewhat removed from the reality we might imagine from such serious subject matter. But that distance gives the narrative and its characters life. They stumble along on their way to arriving at a safe space that is touching and achingly funny. (Opening Friday at the Esquire Theatre.) (PG-13) Grade: B+