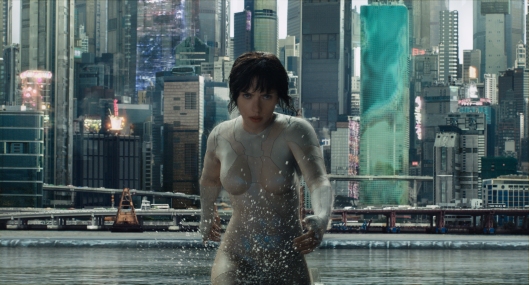 Watching this Rupert Sanders live-action remake of Mamoru Oshii’s 1995 anime (based on the manga by Masamune Shirow), audiences should be forgiven for making unfair comparisons to a host of action movies that came after the animated classic. The story contains narrative ghosts that haunt everything from “The Matrix” franchise and the “Bourne” flicks, while also referring back to hard-boiled futuristic tales like “Blade Runner.” Scarlett Johansson plays the cyborg police officer intent on hunting down a hacker with clues pertaining to her past, and she’s mining recent efforts like “Under the Skin” and “Lucy,” exploiting the minimalist approach to great effect. It’s just too bad that outside a curiously engaging turn by Pilou Asbæk (who really should be considered for the role of Cable in the “Deadpool” sequel, if its not too late) as her partner, “Ghost in the Shell” comes across as a forgettable retread rather than a visionary re-imagining.

A group of high school rejects – dethroned jock Red Ranger Jason (Dacre Montgomery), autistic Blue Ranger Billy (RJ Cyler), cheer-less cheerleader Pink Ranger Kimberly (Naomi Scott), loner Black Ranger Zack (Ludi Lin) and new girl Yellow Ranger Trini (Becky G.) – stumble upon the long-buried spaceship of Zordon (Bryan Cranston), a defeated Red Ranger and must ban together to stave off the attack of Zordon’s sworn enemy Rita Repulsa (Elizabeth Banks). Once again, I find myself outside a cultural touchstone, because I’ve never even watched an episode of any of the “Power Rangers” television shows, but director Dean Israelite (“Project Almanac”) makes what could have been a straight to VOD version of “Chronicle 2” buzz along with workmanlike efficiency. There’s not enough full-throttle energy to power a complete reboot, but viewers won’t kick themselves for wasting time watching “Power Rangers” when it arrives on cable.