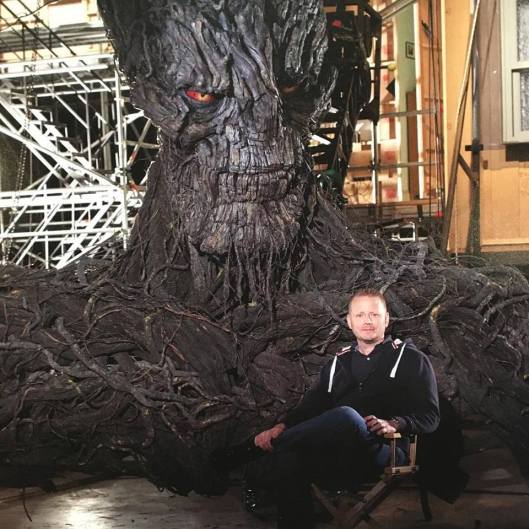 A Monster and author-screenwriter Patrick Ness

Immediately following my opening night encounter with Patrick Ness’s adaptation of his novel, directed by Spanish director JA Bayona (“The Orphanage”), I tweeted that it should be paired with “The Babadook,” writer-director Jennifer Kent’s haunting tale about a single mother seeking to protect her aggressively fearful son from a sinister presence haunting their house. (Thank you, Mr. Bayona, for the like.) Both films teasingly tap into horror conventions, but inject a sense of loss and mourning into the plights of their characters that refuses to kowtow to the pabulum of happy endings. Audiences have wondered if “A Monster Calls” is appropriate for children. I would say most definitely, especially if you want them to become adults in touch with the full range of the human experience.

How can it be all doom and gloom for the undead? You have the potential to live forever. You’re insanely powerful and could spend all of those lifetimes indulging in all the intellectual and sensual beauties the world has to offer. Wait, I’m thinking about the underworld of Jim Jarmusch’s “Only Lovers Left Alive.” Forgive me. In the “Underworld” franchise toplined by vampire warrior Selena (Kate Beckinsale), there are only swords, blue bullets, bloodletting, and barely visible martial arts fight sequences. Television series veteran Anna Foerster (“Criminal Minds” & “Outlander”) fails to lighten the frames or the mood, rendering yet another painfully dead installment that’s completely indistinguishable from the others. What’s the point of living in this world (or subjecting yourself to it on any screen)?