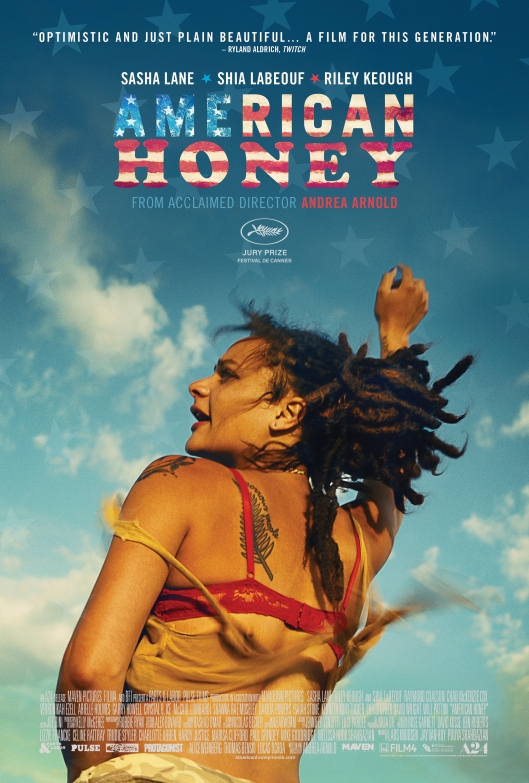 There is a reason why I chose this image to introduce this interview. The bold poster – busy with information about the film, the “American” imagery, and a loving pull quote – works its magic exclusively because of the presence of its star, newcomer Sasha Lane, who plays a young woman appropriately named Star. She is a lost child, on the margins, seemingly waiting for the arrival of Pan or a prince, someone or something to whisk her away from anonymity to a life beyond anything she might have ever dared to dream for herself.

To talk to Lane, as I did a few days before American Honey‘s opening in our Midwestern market (weeks after I had seen the film at the Toronto International Film Festival), is to appreciate just how much art reflects the realities of life. It is not a stretch, listening to her describe her introduction to American Honey director Andrea Arnold and the circumstances that led to this grand adventure, to draw parallels to Star’s journey.

I was on Spring Break when Andrea  approached me, we got to talking, and I ended up staying a week longer to do improv work with her. We had a lot of conversations and by the end of that week, she told me she wanted me to do it. I think I was at a point in my life where I didn’t have anything planned and it was much easier to let go of my fears and just go for it. And too, I always had this feeling that something was going to happen, and here, she (Arnold) comes with this opportunity that sounded like something I wanted to be a part of. I had this groovy, overwhelmingly good and whole feeling and that is what pushed me towards doing this. It was just what I was supposed to do and I went with it.

One day someone will stumble across the American Honey poster and recall hearing about this film or maybe even seeing it themselves, and whether they remember any of the specifics of the film, they will likely latch onto the sense or feeling they had of Lane, that raw star quality she possessed in this filmed moment. How refreshingly sweet and biting she was. How much she embodied some undiscovered dream of American culture.

Star’s narrative experience mirrored Lane’s so much that she confided, “that towards the end, I was very scared as to what was going to happen to her, because it was me (too), in a way. I didn’t know the script, and I said to Andrea, ‘you know you’re kinda mapping out my life here. So, let me know what it’s gonna be like?'”

There is this embrace of the indie spirit, a willingness to race off into the unknown with her eyes wide open. Forget the safety of planning a future or a career.

I don’t want to be in charge of that necessarily. I don’t know a lot about this industry, certain films or the types of people. I’m just discovering that and I like that idea, of just seeing what comes out of this experience as I move forward.

This is what we imagine that real stars do, the real “American” stars that transform themselves from role to role, shedding one character, an old skin and a specific collection of traits, for another, in order to create a new self, despite the fact that we, as an audience, search through all of those former incarnations for familiar trace elements, glimpses of what we first saw that attracted us.

I like the notion that Sasha Lane, years from now, if she’s still even making movies at all, will have slipped free of Star and whatever roles immediately followed. She will continue to blaze a trail forward, untethered from Star or the Sasha Lane of 2016.