The first day of screenings finds the Toronto International Film Festival living up to this year’s tagline – Infinite Views – offering a bit of everything for the coverage-hungry members of the press, the industry buyers, and the international film fans ready and wiling to stand in lines that wrap, almost completely, around the block.

For my blog diary this year, I should issue a fair warning. For the first time, I’m staying three days longer (the entire festival, for all intents and purposes), which means I had choices to make. See more films? Well, yes, that was definitely going to happen. Book more interviews? Again, yes, depending upon my schedule and that of the talent on-hand. Check out a bit more of what Toronto has to offer, in terms of cultural events? Most definitely. But have no fear, I’m always going to connect it all back to film. I’m just expanding the critical discussion a bit.

Back to Day One.

To infinity and beyond. Where else can you go from a crowd-pleasing slice of action like Antoine Fuqua’s remake of The Magnificent Seven with Denzel Washington riding and shooting like an avenging angel and Chris Pratt oozing charm from the frames he’s not even in to the quiet, no-nonsense drama of Mia Hansen-Løve’s Things to Come, the follow-up to her 2014 TIFF entry Eden, which stars the incomparable Isabelle Huppert.

Talk all you want to about how the Fuqua-helmed Western marks the re-teaming of the Training Day posse (Ethan Hawke joins Fuqua and Washington here, having a touch of fun as a sharpshooting Cajun), but maybe we should remember that we’re suffering from remake and sequel-itis. The latest victim of this fatal disorder – Ben-Hur – lies on the slab now, awaiting the conclusion of it’s post mortem. This Seven might not be as close to magnificent as everyone would have hoped, but Fuqua keeps it moving and frames its multi-cultural cast in good light without drawing undue attention. In the end though, that could be part of the problem. The movie isn’t responding to or defining this particular period in any way, which it could be argued that the John Sturges Western did in 1960, reconfiguring Akira Kurosawa’s Seven Samurai for American audiences, while setting the stage for The Wild Bunch and so many more to come.

What’s the trend Fuqua is pointing us toward now? 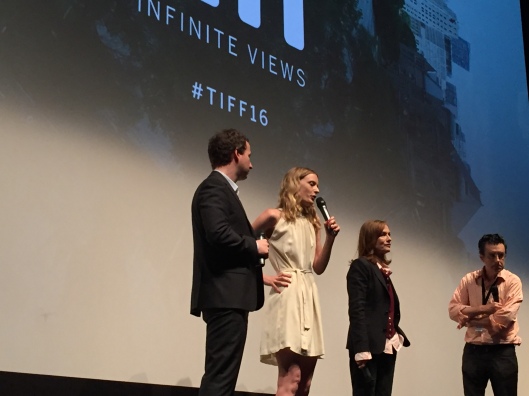 Director Mia Hansen-Løve speaking, with Isabelle Huppert to her left at the opening screening of ‘Things to Come’

So, what about Huppert? If you don’t know the French actress, you should – check out say, the 1983 romantic comedy My Best Friend’s Girl or the more dramatic Story of Women (1988) or flash forward to The Piano Teacher (2001) or Amour (2012). Or, better still dive into one of the seemingly infinite number of films (Things to Come, Elle, and Souvenir)  she’s appearing in this year at TIFF. Things to Come finds her playing a philosophy teacher and author, so engrossed in her ideals, she misses the reality of life around her, where everything comes crashing down on her at once. Her aging mother (Edith Scob) dies, her textbooks get axed, and her husband Heinz (André Marcon) leaves her for another woman. Having caught the film with a public audience late last night, I can attest to the fact that its adult themes play well, because they are infused with warmth and wit. Certainly human, but never fragile or too precious for real moviegoers. (tt stern-enzi)