Alicia Vikander, Derek Cianfrance, Michael Fassbender, The Light Between Oceans, The Place Beyond the Pines 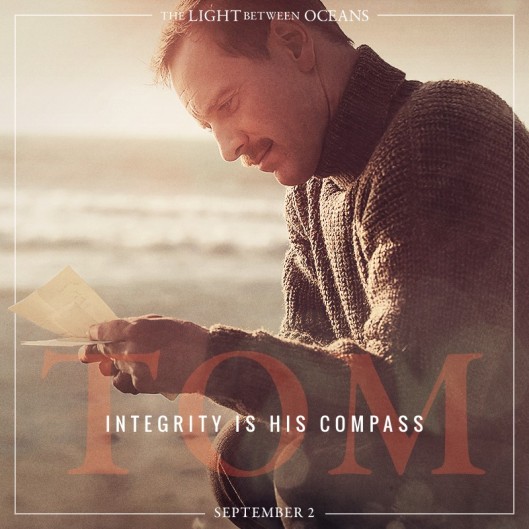 In the alternative universe loosely contained in my brain, director Derek Cianfrance is a younger Coen brother, desperate to step out of the shadow of his older snarky siblings. That dynamic duo, whose work leaps from madcap Molotov cocktails (Raising Arizona) to dark ruminations on the human condition (No Country for Old Men), could reanimate a dead and lifeless language in their films and make it sing a funky tune.

And all the while, Cianfrance, whose previous films are Blue Valentine and The Place Beyond the Pines, sits watching and studying their every move, wanting to do the same. But he knows it would do him no good to merely mimic. No, he would rather up the ante, to truly separate himself. Why not try to light a fire from the damp twigs of literary melodrama?

Which is what he seemingly found in The Light Between Oceans, the first novel from Western Australia-born author M.L. Stedman. Published in 2012, the narrative (as presented in Cianfrance’s adaptation) shoulders the burden of historical fiction rooted in a time — immediately following the end of World War I — when earnest disillusionment achingly laid claim to our hearts and our tongues.

When we initially meet Tom Sherbourne (Michael Fassbender), a brooding veteran, we know he has seen and experienced things in the European trenches that will so haunt him that he seeks to lock himself away in solitary confinement. That is what leads him to return to Australia and a coastal community seeking a job as a lighthouse keeper.

But as withdrawn as he is, Sherbourne is the only eligible young man around. And when he lays eyes on Isabel Graysmark (Alicia Vikander), the die is cast. She’s the beautiful and independent-minded daughter of a pillar of the community.

We most certainly know what each of them is thinking, because Fassbender is the very embodiment of chiseled melancholy and Vikander glows from within. Yet she appears capable, at a moment’s notice, of summoning hurling deadly bolts of lightning with aim as true as Elvis Costello’s.

The pair of them seems to exist to animate the worlds of Charlotte Brontë (Fassbender already has director Cary Joji Fukunaga’s Jane Eyre adaptation under his belt) and Thomas Hardy. So, of course, Cianfrance had no choice but to weave them into his carefully tended twist on Raising Arizona.

Like the ex-con H.I. McDunnough (Nicolas Cage) and his ex-cop wife Edwina (Holly Hunter) in that film, Tom and Isabel have difficulty bearing children of their own. They spot a baby adrift in a rowboat, next to a dead man, and rather than alerting the proper authorities on the mainland, they conspire to raise the child as their own.

Their act of thievery is less active than that in Raising Arizona, but it is certainly in keeping with the literary melodramatic flourishes of the period. The romantic desire for a family that might complete him transforms Tom, offering him a fleetingly tragic chance for rehabilitation.

With this Light, he seems to long to impose his will on the formality of the book’s blueprint. But there is no room for him to shine because of the strictures of the source material. Without those, the Coens showed us how love and desire could make people do so much wrong and yet, even in the midst of raising Arizona and no small amount of hell on Earth, only the truly right thing results.

Cianfrance understands this because in 2012’s The Place Beyond the Pines, he ably sidestepped the trap of genre formality by giving in to the loud and messy histrionics of his characters. Ryan Gosling portrayed a motorcycle stunt rider who turned to robbing banks in order to earn cash to support his lover and their newborn son.

Along the way, he encountered a rookie cop (Bradley Cooper) seeking to walk the straight and narrow in a corrupt department. Both men succumb to “the dying of the light,” as Dylan Thomas put it, in their individual ways. It took us to see how their choices impacted their offspring before we appreciated their actions with any real sense of clarity.

Cianfrance could have made this serious Light his own by braving the powerful undertow of period sensibilities and charting his own course. O brother Cianfrance, where art thou? Maybe next time. (Opens wide Friday) (PG-13) Grade: C-