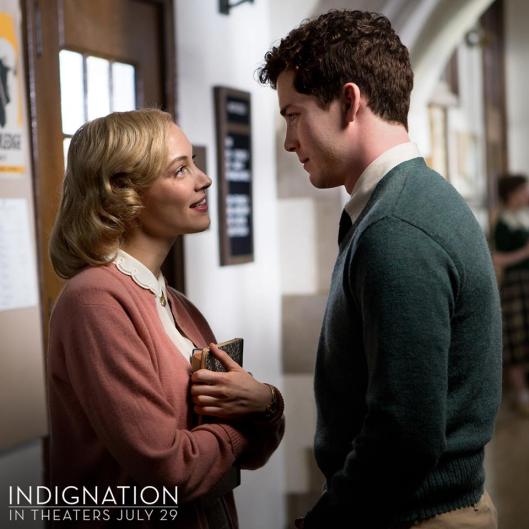 How many times have we seen the coming-of-age story of a young man, a quiet outsider, set in the academic world? It is certainly a literary and cinematic staple.

With the new film Indignation, writer-director James Schamus’ adaptation of a 2008 novel by Philip Roth, we have a most worthy addition to that body of work. It is the story of Marcus Messner (Logan Lerman), a Jewish butcher’s son from Newark, N.J. who is attending a small conservative college in Ohio in the early 1950s.

Quite possibly the finest example of a coming-of-age story set in academia is the novel A Separate Peace by John Knowles. Also worthy is the film School Ties, which took us down the path of anti-Semitism with Brendan Fraser as a working-class prep school student who seeks to conceal his Jewish identity.

I find real resonance in such tales as a prep-school graduate who, as a child of the Civil Rights generation, struggled with issues of acceptance in the dawning days of political correctness. My literary touchstone was Ralph Ellison’s Invisible Man, despite the fact that so little of that narrative is set in an actual school. Ellison’s unnamed narrator gets the ultimate socio-politically charged education from life itself.

What Schamus weaves out of Roth’s Indignation is an intimate study of how Marcus’ experiences are informed by questions of identity politics, with strands of religion seamlessly interwoven.

Marcus is the gifted boy from the neighborhood, the one with a chance to make something of himself. Diligent and disciplined, he cannot imagine doing anything that will deviate from the overall plan laid out in his utilitarian good book. He arrives at his Ohio college with blinders on, not noticing either a campus administration seeking to prove itself open and inviting to all or the tiny, insular community of Jewish students seeking to carve out a haven for themselves.

Marcus dares to walk alone, refusing even to maintain a dutiful connection to his parents. No man is an island, but Marcus sets out to prove himself an exception. But then he crosses paths with Olivia Hutton (Sarah Gadon), the troubled blinding light that will alter his trajectory. Schamus clearly establishes that the attraction is definitely mutual. The terribly sheltered Marcus cannot explain the hormonal swell that overtakes him.

In a truly measured performance, Lerman leaves the blank slate he carefully cultivated in a string of Young Adult fiction-inspired efforts (two Percy Jackson franchise gigs and The Perks of Being a Wallflower), completely submerging himself in the gifted head and restrained body of this introverted man-child. Knowledge is the key and Lerman’s unfussy acting opens the lock.

In contrast, Gadon’s job might seem far easier, but her performance is full of charm. Her extroverted character, Olivia, picks up on the iconoclastic beacon emanating from Marcus, appreciating that he is unlike their peers. She spots his drive and determination, but also the deeper philosophical conviction, and she wants to discover its roots.

Olivia reacts impulsively, lavishing Marcus with a sexual favor that astounds him in its unconditional offering. It sets up a series of quid-pro-quo exchanges. After much prodding, she reveals crumbs of her own background, a series of emotional and psychological failings that have left her scarred but still somewhat hopeful. She isn’t looking for a savior, just an example to follow and Marcus seems to be the perfect choice.

Indignation, much like Woody Allen’s Café Society, evokes a sense of F. Scott Fitzgerald’s Great Gatsby. Complex, idealized women prove capable of irrevocably altering the fates of foolish young men. Yet Olivia, despite the attractive radiance about her, is no simplistic manic pixie dream. Marcus certainly sees in her an alluring (and quite confusing) sexual fantasy, but she also symbolizes the dream he has for himself, one that he resolutely fights to achieve against the odds.

Schamus documents Marcus’ inevitable fall from grace, carefully balancing a degree of detachment with a knowing reflection of the period. Indignation resolutely remains a solitary character study, and it challenges viewers to look inward for a glimpse of their own quiet redemption. (R) Grade: A