BEHIND YO-YO MA AND THE SILK ROAD PROJECT

Art may be the purest representation of culture. In its many forms, art captures community, history, social interaction and engagement, and civic spirit through the senses. Although we, as a people, as subcultures defined, may not be the primary creators of these forms nor always eager to recognize or embrace these representations as reflections of ourselves, they stand as both witness and testament, and some have proven to stand the albeit brief test of time (thus far).

Recently, while reading Questlove’s book, “Something to Food About,” in which the hardest working (and most interesting) man interviewed 10 innovative chefs, seeking to establish links between music and food, I was fascinated by an emerging line of questioning about the shifts in culture and identity that develop via the fusing or merging of sensibilities. What happens when a chef (or musician) from one culture investigates and interacts with another? And the hybrid borne, is it a dilution of the original culture or something new?

Questlove kept the discussion firmly in the realm of the foodie for his project, but Morgan Neville, the Academy Award-wining documentarian behind “Twenty Feet From Stardom” and explorer of all things musical, latched onto this cultural thread, weaving it seamlessly and far more prominently into his latest release, “The Music of Strangers.”

On the surface, “The Music of Strangers” focuses on Yo-Yo Ma, the world-renowned cellist and a global ambassador of music of the first order. He stands as one of those figures known, most likely to Americans who, if asked, might never actually have heard a note of his work. As a music lover, my intimate experience with his work doesn’t necessarily extend beyond a decades-old collaboration with Bobby McFerrin. Their CD sits in my collection, and I was fortunate enough to catch the pair perform live, in what still ranks as one of the most whimsical and inspired concerts I have ever attended.

Neville introduces us to a far more grounded artist, a man seeking connection and understanding, as a craftsman and a citizen of the world. Constant touring led Ma to question what music meant, beyond the merely perfect rendering of notes (notes of culture that had been passed across generations). He wanted to find points of intersection and communion, which pushed him to gather a group of international musicians, back in 2000, to form The Silk Road Project. If you will, imagine a stage filled with musical seekers, expert and diverse, speaking a common language through stringed and fluted and percussive tongues that audiences might never have been able to conceive of before.

Some have labeled this a form of cultural tourism, a passing through and quick pillaging of shiny baubles of sound and kitsch. This argument smacks of the general concerns applied to the notion of integration and melting pot symbolism. Certain validity exists when, and if, we think of what can be lost (or disappear) in such translations. 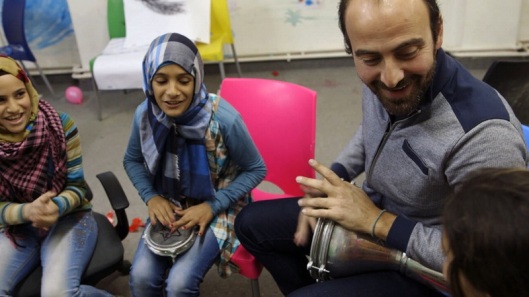 But what the film documents, so sensitively, is the ongoing evolution of the group, this family borne of the merging of individuals and individual cultures. Many members of the collective found solace and safety – a place of refuge from the real and present dangers of politics. They share their stories, their hardships, and their triumphs, and we come to appreciate how they – through their lives and their art – represent struggling cultures. Art allows them the space to keep their culture alive and vibrant, in all its complexity. “The Music of Strangers” challenges us, forcing us to consider if what these artists have created over the course of 16 years, on-stage and via recorded works, is a bastardization of those unique pockets and subcultures or the expression of a new tradition. We may be one human race, but “The Music of Strangers” shows us the power and glory of the many elements at work.

THE MUSIC OF STRANGERS