As a black Southerner, I have to admit to having a difficult time accepting the simplistic White savior heroics that tend to dominate Hollywood adaptations of historic periods involving slavery or the Civil Rights movement. That is not to say that Newton Knight (Matthew McConaughey) wasn’t a truly revolutionary figure, a Confederate deserter who led a Southern Unionist guerilla company in Mississippi that continued to have an impact through Reconstruction. I just find it curious that writer-director Gary Ross (“Seabiscuit”) focuses on the righteous saint, rather than exploring the complex implications of his personal decisions on his white and mixed-race progeny. This is where Knight and the “Free State of Jones” reveals itself to be a true parallel to modern race relations.

Bigger, sadly, isn’t necessarily better, and it is time that action junkies like Roland Emmerich learn this valuable lesson. Picking up 20 years after the first installment in what he obviously assumed would be a destruction porn franchise, Emmerich constantly reminds audiences that “Independence Day” is all about fending off the advances of a horde of alien barbarians at the gates, but the movie is stuffed with too many ill-formed narrative threads that are never sown together, and an onslaught of wanton CGI destruction with no sense of scale. And I think it might be time to lump Liam Hemsworth in with Sam Worthington as failed action heroes-in-waiting, because no matter how hard we try Hemsworth isn’t emerging as a successor to the Stallone-Schwarzenegger-Willis line any more than Jaden Smith could stand in for his father in “Ali 2.” 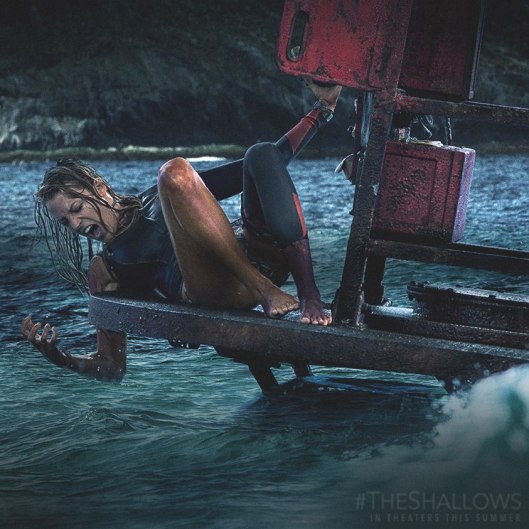 Back in 2010, Ryan Reynolds starred in “Buried,” a little-seen indie from Spanish director Rodrigo Cortés about a US truck driver working in Iraq who finds himself buried alive in a coffin with only a cell phone. He was alone with the clock ticking down and Reynolds proved quite capable at handling the isolating claustrophobia. It seems his wife Blake Lively wanted a similar challenge. For “The Shallows,” she teams up with Jaume Collet-Serra (the Spaniard behind the Liam Neeson action trilogy of “Unknown,” “Non-Stop,” and “Run All Night”) to depict the harrowing experience of a young surfer trapped a mere 200 yards from the shore by a determined great white shark. Although she’s not completely alone, Lively seizes the spotlight, engaging us in her desperate dilemma, when it is obvious that the set-up seeks to exploit her as a fetchingly hard-bodied damsel in distress.