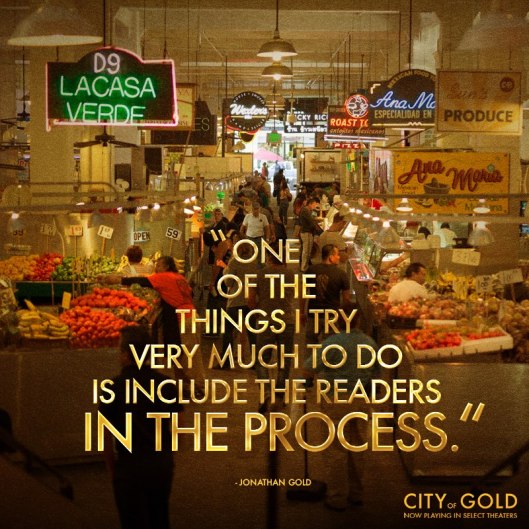 A recent spate of books on leading critical voices—AO Scott’s “Better Living Through Criticism” and Owen Gleiberman’s “Movie Freak: My Life Watching Movies”—has sent me down a rabbit hole of sorts, questioning and challenging the idea of what it means to be a critic. I pride myself on initiating a dialogue, teasing readers with film into tangential conversations and reflections on society and their own experiences. It’s about taking one passion and using it to get people thinking critically, stretching themselves beyond the immediacy of the moment, to offer context and clarity on this thing called life.

It is rare indeed that a feature documentary takes as its focus the life, times and experiences of a critical force, especially within the restaurant world, but the Pulitzer Prize-winning food critic Jonathan Gold, does not limit himself to mere discussions about food, so why should a film about him? Documentarian Laura Gabbert (the curiously engaging feature “No Impact Man: The Documentary” about a family attempting to live a year with no net environmental impact) creates in “City of Gold” an odyssey of modern culture with Gold as the quintessential guide through this epic tale.

Thanks to a still-trending explosion of interest in food culture—from magazines focused on food (and travel) to the rise of cable programming dedicated to global cuisine (covering everything from fine dining to exotic local fare)—we now dream of seeing and experiencing the world through our palates, which means we’re fascinated with honing and refining this somewhat neglected and ill-considered sense. When we travel, some of us plot and plan our trips around a quest for dining discoveries, and it now even affects the way we appreciate our home front urban scenes (my wife and I are definitely adherents to this new cult).

What we’re taking part in, quite actively, is a redefinition of culture.

And “City of Gold” hooks us up with a happy and dedicated explorer and chronicler of the food beat, which is an ironic thing when you consider that most food critics go out of their way to maintain a degree of anonymity like a badge of honor. For restaurants to know them means preferential treatment, a heaping on of extra touches to a plate and a meal that taints the review, elevating their meals beyond those of other patrons.

Gold factors this into his framework, but does not, in any way, allow it to weigh him down because he knows that what he’s doing is more meaningful than merely “reviewing” dishes or restaurants. Inspired by renowned writer Calvin Trillin, he’s engaged in “writing about the culture of eating.” There is a marriage between how food is prepared and how it is consumed, a union that needs to be appreciated within the proper context.

Gabbert places us alongside Gold, creating a level of intimacy that feels earned, which is largely due to Gold himself. He has no walls, no barriers between himself and the food, the chefs and cooks who prepare the meals and/or the cultures from which everything emerges. And more importantly, he doesn’t subscribe to the notion that his experience with any of these elements translates into false knowledge. Just because he’s had a few meals from a particular region of the world doesn’t grant him omnipotence about that place or its people. What he gains, and passes on to readers, is context.

And, as the Los Angeles food critic, context helps him to tell the story of his city, which achieves that sense of being “a melting pot” we aspire to as a country. It all comes together for Gold because he refuses to discriminate or uphold elitist preferences. From the white table cloths and the fine china establishments to the strip mall spots, Gold crisscrosses the byways, taking a seat and taking in all that his city has to offer.

And thankfully, his mission doesn’t stop there. It would be fine, certainly all that could be expected of a critic, but Gold sees that as the starting point. He democratizes food, city and culture for everyone under his purview. “City of Gold” shows us the epitome of cultural commentary on modern life. Jonathan Gold just might be the Michael Jordan of critics. I know I want to be like Gold.