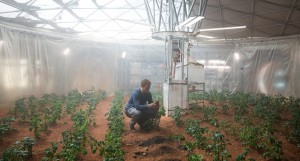 Matt Damon as Mark Watney in ‘The Martian’

Watching Ridley Scott’s new film, “The Martian,” I found my thoughts straying, oddly enough, to the late great Yogi Berra and one of his treasured witticisms—“it’s déjà vu all over again”—because there I was, watching a 3D sci-fi tale about an astronaut lost and alone in space, who has to “science the shit” out of a bad situation, MacGyver-style, in order to survive. Just a couple of years ago, the film in question was Alfonso Cuarón’s “Gravity,” starring Sandra Bullock as the way-out-of-her-depth astronaut dangerously close to drifting away forever. The Toronto International Film Festival apparently has a thing for lost-in-space capers.

There’s a funny takeaway though, based on the obvious similarities between these films. “Gravity” went on to earn seven Academy Awards, including Best Cinematography for Emmanuel Lubezki and Best Director for Cuarón (falling to “12 Years a Slave” for Best Picture). It certainly wouldn’t be all that surprising if Scott were to find himself in the hunt for a prize or two with “The Martian.” He has three directing nominations to his credit thus far—“Thelma & Louise” (1991), “Gladiator” (2000), and “Black Hawk Down” (2001)—but he’s best known for his dark and engrossing examinations into the future (“Blade Runner”) and alien worlds (“Alien” and “Prometheus”).

Yet, “The Martian” plays a bit of a trick on audiences by teasing us with the sci-fi angle; an alternative not so distant future where NASA hasn’t abandoned the idea of exploration and colonization, and a manned mission to Mars faces inevitable complications. A freak storm escalates, forcing the team to pull up stakes and head off sooner than expected. During the hurried escape, Astronaut Mark Watney (Matt Damon) gets swept away and is presumed dead. Team leader Melissa Lewis (Jessica Chastain) shoulders the burden of responsibility, while back home, NASA chief Teddy Sanders (Jeff Daniels) solemnly leads a period of mourning.

That is, until the mission control crew on Earth discovers that Watney miraculously survived the storm and, due to his expertise in botany and general ability to, you know, “science the shit” out of things, figures out a way to keep himself alive while plans get underway to bring him back to Earth. It turns out one of the key elements of colonization is not just the idea of large-scale migration of people to a colonial region; there is also a focus on transforming what was considered a blank space by the planting of seeds—literal seeds. Watney expands his test experiences, by necessity, using Martian soil to grow potatoes, thereby becoming the first colonized inhabitant on the planet.

“The Martian” breaks free of the “Gravity” mold though, by constantly shifting the perspective from Watney. His efforts, as ingenious and engrossing as they are (thanks to an Everyman turn by Damon that rivals both Bullock and Tom Hanks in “Castaway”), merge into a much larger and scientifically (and politically) complex web being spun by several units within NASA, the international community, and Watney’s mission crew, which was on its way home, but makes the daring choice to swing back to Mars to retrieve their lost man.

Ingenuity leads the way, and Scott’s film celebrates the spirit with the bubbly enthusiasm of a high school pep squad and his usual sure-handed technical mastery we’ve come to expect from him. Intriguingly, even in 3D, the visual virtuosity disappears behind the escalating human stakes. “The Martian” never loses sight of the fact that it is about a supreme test of will, intelligence and human triumph.

Which, of course, leads me back to Berra, who said it best. “It ain’t over till its over.” Watney’s journey, and ours, experiences hiccups and setbacks along the way, but the mission is to bring him home, and Scott shows us each excruciating and transcendent step along the way.