The viewing experience sometimes needs to be shared, and I’m talking about films beyond the obvious genre exercises — the found-footage horrors where very little happens, seemingly made for midnight screenings, or the mythic displays of cartoonish world-beating violence that dominate the shared mythic realms of our comic book universes. No, I’m talking about the character-driven narratives, the minor indie reflections of the quirkily mundane, presented in occasionally stylized frames. These are the films that sometimes need to be cracked open like fine wines to breathe before being dispensed and discriminatingly sampled for delicate spices and hidden notes that might tickle the palette. 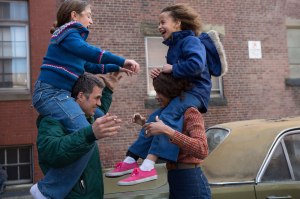 I recently uncorked Infinitely Polar Bear during a film club session with a select group of Lighthouse Youth Crisis Center participants. The title arrived with the expectation of a more private screening for coverage, and I dared to offer it up to the club as a film that none of these kids would likely pay to see in theaters on their own — quite possibly they wouldn’t even consider it if the movie ended up before them years from now on cable or in a streaming queue.

In a tangential way, I liken it to the impetus behind Between the World and Me, the already much-debated new release from Ta-Nehisi Coates. That book arrives as part of a tradition that goes back to James Baldwin’s The Fire Next Time, socio-cultural commentary addressed to a younger generation (in each case 14-year-old male children) from a perspective weighted with inevitable frustrations and hard-earned wisdom.

Coates uses sociological talking points and the known (albeit rarely referenced) historic record to accent very personal anecdotes about growing up under a dominating and ever-present institutional regime that from a distance offers the appearance of change, only to have that sense erode upon closer inspection.

Coates finds himself at odds with the notions of hope and belief, seeing them as just examples of psychological chains — tools to constrict and imprison potentially beautiful minds and spirits. Without a doubt, I can appreciate those concerns, and I tend to retreat into a well-fortressed cynicism.

At first glance, the parallels between Between the World and Me and writer-director Maya Forbes’ narrative — about the struggles of Cameron Stuart (Mark Ruffalo) and his wife Maggie (Zoe Saldana) as they attempt to raise their daughters Amelia (Imogene Wolodarsky) and Faith (Ashley Aufderheide) while dealing with Cameron’s acute manic depression during the mid-to-late 1970s — seem fleetingly tenuous at best. Infinitely Polar Bear spends most of its run time focused on Cameron’s dilemma, although it does a surprisingly good job of framing it through the impact on his daughters.

And rather than highlight the more innocuous circumstances in broad situation-comedy fashion — where the girls might merely be embarrassed by a parent like Cameron ping-ponging between manic highs and emotional depths — we see and feel the genuine affection the girls have for their father (and that he certainly has for them) balanced alongside cautionary instances where the children are isolated in situations that, today, might be labeled endangerment. It was fascinating to hear teens grapple with the complex realities of dealing with a parent — especially a father — like Cameron who is barely able to hold himself together but wages this intimate internal battle to do so for his kids.

From an instructive standpoint, the film works well as a tool for discussion, too, because of the period time frame. For instance, when questions of race arise briefly when the older daughter expresses concern to her mother over the idea that she is constantly challenged when she says she’s black because she doesn’t have obvious “black features,” it forces modern teens to recognize how the way we apply categories and have these discussions has changed. I had to point out to the class that biracial distinctions — so commonplace in our lexicon — were not prevalent more than 30 years ago. I’m not sure it means that we’re more enlightened, but there is definitely a willingness to allow for more specific self-definition.

But it is the fact that Infinitely Polar Bear provides an opportunity for audiences to engage in these considerations, effortlessly, that the film will win over hearts and minds. Forbes narrows the distance between the audience and the film’s characters, presenting them as people struggling courageously, beautifully and ultimately as truly human beings that can be seen and appreciated as such. (Opens Friday) Grade: B+ (tt stern-enzi)