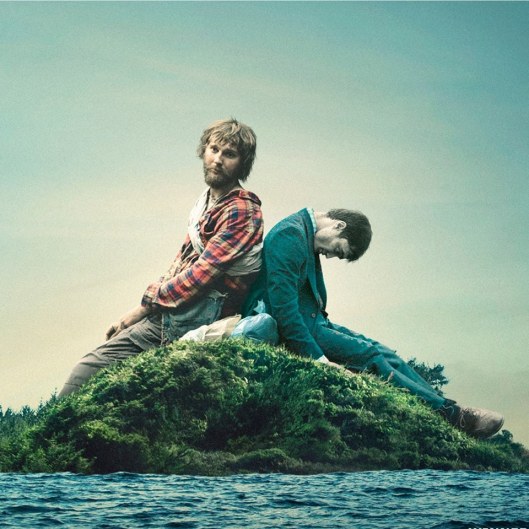 “Finding Harry Potter” should be the new pop cultural game played across all social media formats. Of course, when I say “Harry Potter,” I’m really talking about Daniel Radcliffe — the actor who played him — because he’s become a chameleon, popping up all over the place in unexpected and surprising roles since completing his run as the most recognizable young-adult character ever.

His latest is one of his most unusual — and one of his best — to date. He plays a flatulent corpse that washes up on an island in Swiss Army Man, which also stars Paul Dano and opens here today.

We tend to forget that the Harry Potter films dominated more than a decade of Radcliffe’s career and life, starting when he was cast at age 11 and continuing until he made his eighth and final film in 2011.

Radcliffe was already in the pop cultural spotlight beyond Harry Potter when he got a featured credit playing himself on the Ricky Gervais HBO series Extras back in 2006.

But his first post-Harry Potter starring role was as Arthur Kipps in The Woman in Black, a decidedly old-school horror film about a vengeful ghost terrorizing an isolated village. Radcliffe played a grieving lawyer struggling to put his life back together after losing his wife during childbirth. What was Radcliffe doing, freshly out of the Harry Potter films, in a horror film?

What we would subsequently learn was that Radcliffe wasn’t remotely interested in charting a particular course for himself. He bounded into the role of Allen Ginsberg in Kill Your Darlings, then sprouted horns in Horns, and fumbled along as a lovelorn nice guy in the indie rom-com What If. He even had a hilarious cameo in Amy Schumer’s Trainwreck as “The Dogwalker.”

The funny thing is I’ve darn-near loved every single one of his choices. Rather than cashing in on a steady stream of A-list offers, Radcliffe has pursued a more eclectic route, to his and our good fortune. With such off-kilter selections, he has generated a wonderfully magical brand, although it sounds so crass to label it that way. Radcliffe operates on an anti-brand channel, pursuing roles that break free of the notion of “work.”

Which is why it makes perfect sense for him to appear in Swiss Army Man as Manny, the corpse that washes up on the island shore just as Hank (Dano) is about to hang himself. Poor Hank, stranded for who knows how long, is at the end of his rope, quite literally, when Manny rolls up.

Make no mistake, Manny is as dead as dead can be. But he also occupies his own special place in the undead canon, as a human version of a life-saving Swiss Army knife. Right off the bat, he farts up a jet stream in truly explosive fashion, when necessary. He talks and displays a facility for relearning basic interpersonal dynamics. His aroused penis points true North like the ultimate compass. Rigor mortis allows him to serve as an all-purpose blunt instrument. And, he produces clean fresh water like a spigot.

Manny seems too good to be true, like a figment of Hank’s imagination similar to the plot in Ambrose Bierce’s classic short story An Occurrence at Owl Creek Bridge. But the co-directors Dan Kwan and Daniel Scheinert (dubbed “The Daniels” in the credits) and the dynamic duo of Dano and Radcliffe never get bogged down in the practicality of narrative techniques. Everyone here is far too busy spinning magic in all of the interplay.

The point is that Hank gets a second chance at life and he seizes it, finding joy in each moment with Manny. He begins to reevaluate and reinvest in what he thought he lost out on in his mundane previous experiences, and reimagines everything anew. In addition to creating changes for himself, Hank transforms Manny as well, calling into question the finality of death.

It would be too simplistic to speak of the relationship between Dano’s and Radcliffe’s characters as a “bromance.” That trendy media term mutes the genuine affection on display in order to sanitize it into something safe and palatable. Swiss Army Man blows gaseous holes in our expectations like a burst of magic from a wizard’s wand. That’s something Radcliffe definitely knows a thing or two about, but he’s also got a host of other tricks up his sleeve. (Opens Friday at Esquire Theatre) (R) Grade: B+